England’s feudal system of leaseholds would perplex a visitor from Mars — or Scotland. Essentially, leasehold homebuyers agree to very long rental contracts. They pay an annual “ground rent” to the freeholder. What just about makes sense in apartment blocks is no more than a money-making ruse when it comes […]

England’s feudal system of leaseholds would perplex a visitor from Mars — or Scotland. Essentially, leasehold homebuyers agree to very long rental contracts. They pay an annual “ground rent” to the freeholder. What just about makes sense in apartment blocks is no more than a money-making ruse when it comes to houses.

Homeowners have long chafed at this, but action has been glacial. It is nearly three years since then communities secretary Sajid Javid pledged to cut ground rents to zero. Some housebuilders, reading the mood music, began tweaking terms on leasehold sales after the financial crisis. A handful of the most egregious leases, including some of those that doubled the ground rent every 10 years, were recalibrated.

Regulators did what regulators do. They talked. They commissioned reports, two of which were published a couple of months ago by the Law Commission ran to a combined 1,500 pages. Now the Competition and Markets Authority has widened the investigation it began more than a year ago, targeting four of the country’s biggest housebuilders.

Investors balked, sending share prices of the quartet — Barratt Development, Countryside Properties, Persimmon Homes and Taylor Wimpey — down between 2 per cent and 5 per cent in morning trading on Friday. The smallest fall was taken by Taylor Wimpey, which has already ditched rent-doubling leases and taken a £130m provision.

Given the foot-dragging to date, even these small share moves may be overreactions.

Too bad for homeowners. Many are locked into leases that give them dwindling years of ownership that only costly extensions can prolong. About 4.3m properties in England and Wales are owned under leases, often on contracts of 90 to 120 years. Unwinding these is complicated by the fact that income streams from ground rents have become an asset in their own right, sold on in some cases to third parties. These include pension funds, vehicles with opaque ownership and funds such as Long Harbour.

The cleanest solution would be to phase out England’s inequitable leasehold system. But that would require political action, not empty talk.

The Lex team is interested in hearing more from readers. Please tell us what you think of the leasehold property system in the comments section below.

Britons go back to work in biggest numbers since lockdown

Fri Sep 4 , 2020
Half of UK workers returned to the workplace in the last week of August, the highest number since lockdown measures were introduced by the government in March, according to data from the Office for National Statistics. A weekly survey by the ONS, published on Friday, showed that 50 per cent […] 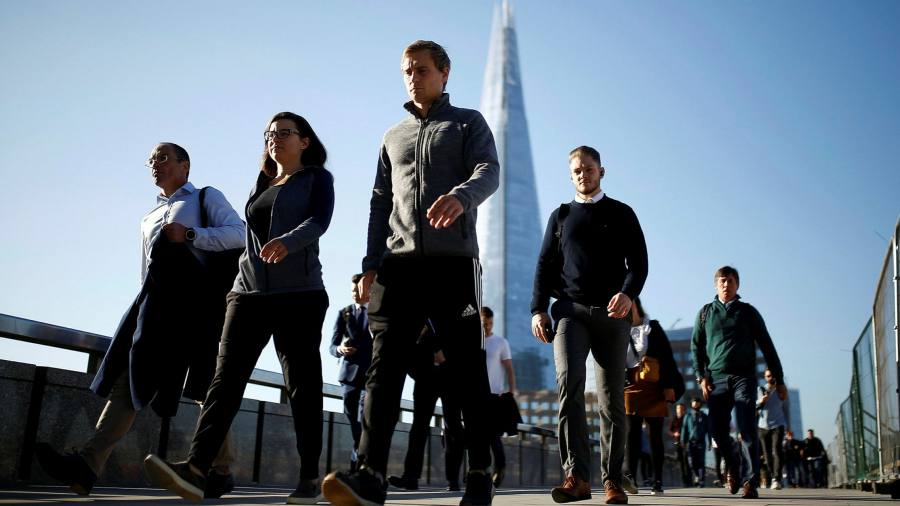