Covid-19 has found its way into the neglected cracks in our economies. In the US, Europe and Asia, poor working conditions in care homes, meat plants and factories have helped to spread the virus. This week, a campaign group blamed clothing sweatshops in the English city of Leicester for contributing to a local surge in cases.

The story of Leicester’s garment district is worth knowing, because it reveals something important about how the British economy evolved in the decade between the financial crisis and this pandemic. It also demonstrates what it will take for the country to “build back better”, as UK Prime Minister Boris Johnson promised to do this week.

In 2018, I investigated Leicester’s clothing industry: a bizarre microeconomy where £4 to £4.50 an hour was the going rate for sewing machinists in many factories (£3 for packers). Tiny sweatshops were crammed into crumbling old buildings and legally compliant factories using expensive machines were being outcompeted by illegally underpaid humans.

It might sound Victorian but the sector is embedded in the 21st-century economy. The big buyers of Leicester’s clothes are online “fast fashion” retailers, which have thrived thanks to the proximity and speed of their UK suppliers. Boohoo, which sources about 40 per cent of its clothing in the UK, much of it in Leicester, prospered in lockdown by switching nimbly to producing leisurewear for the homebound, while rivals were left with shipping containers from Asia full of summer party dresses.

Boohoo’s co-founder Mahmud Kamani has become a billionaire and is set for a £50m bonus if Boohoo’s share price continues to rise. The campaign group Labour Behind the Label has alleged that the some of company’s suppliers contributed to the spread of coronavirus; Boohoo says it adhered to all government guidance and that its supply chain adheres to all labour laws, though it does not publish a list of its suppliers.

Leicester’s sweatshops, which comprise part, but not, all of the city’s garment sector were an open secret even before my investigation began. In fact, a senior Whitehall official first told me about them. A local official in Leicester warned me in 2018 that, if I published my story, I would cause mass unemployment for people with no other options. In fact, nothing changed. After publication, I was invited to testify at a parliamentary select committee hearing into the costs of online fast fashion. The government rejected every one of the committee’s recommendations.

The bill for that inaction has now come due. As well as the feared harm to public health, Leicester’s economy will suffer from a prolonged lockdown and fall further behind more prosperous parts of the UK. So much for “levelling up”. In truth, there was always an economic cost to allowing labour exploitation to flourish. The garment factories are a microcosm of Britain’s productivity problem. Job creation boomed after the financial crisis and ministers did not worry initially about their quality. They pushed up the minimum wage but left it badly under-enforced, while cutting back health and safety inspections to free up “entrepreneurialism”.

Leicester shows that when human labour is too cheap, it doesn’t make sense to invest in machines and technology. The UK’s low-paid sectors are 30 per cent less productive on average than the same sectors in Belgium, France, Germany and the Netherlands.

As unemployment rises in the months ahead, it will be vital to focus on jobs. But to prioritise quantity while turning a blind eye to quality would be to repeat past mistakes. This week Mr Johnson promised a “New Deal” for Britain to close the “yawning gaps between the best and the rest” in productivity, skills and regional inequality. Leicester is the place to start.

In a world of ever-faster fashion, there is a genuine business case for UK retailers to source a proportion of their clothes at home. Leicester’s workers are skilled garment makers and the city’s compliant factories (which have invested in some machines) are not prohibitively expensive. If the government devotes enough money and political will to properly enforcing its own labour laws, it can set a level playing field that ensures decent, if low-paid, jobs in a community that needs them. A big push on free local training, especially in English, would give others the chance to move into different work.

Two years ago, I spoke to workers on £4 an hour who had concluded the government did not think they were worth the protection of the law. “The government knows what’s happening in Leicester”, one said flatly, “and that’s it. They don’t do anything.” This week, Mr Johnson promised to create “a government that is powerful and determined and that puts its arms around people”. The fate of Leicester’s clothing workers will be the test of whether he meant it.

Fri Jul 3 , 2020
The UK tourism industry branded 2020 “a write-off” on Friday even though ministers said travellers in England could visit 59 overseas destinations without having to self-isolate for 14 days on their return from July 10. The list of countries dubbed safe by the British government includes almost all of Europe, […] 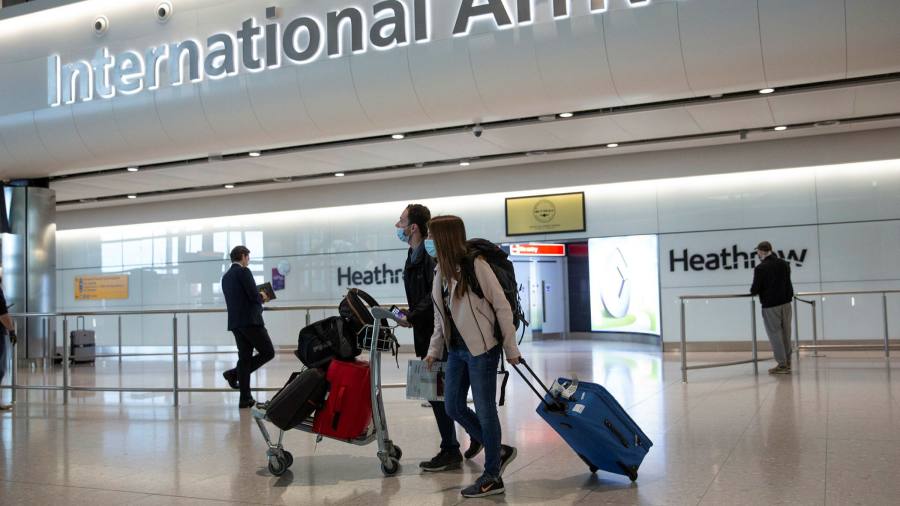