The lights are set to come back up again in English theatres from Saturday after months of darkened houses, but the industry has warned most would be unable to survive under the constraints of social distancing.

Ministers on Thursday said theatres in England could reopen from August 15, two weeks later than planned, after the earlier reopening was cancelled following worries about a rise in positive tests for Covid-19 — a situation they said “now appears to have levelled off”.

The relaxation on indoor shows brings a measure of relief to a sector which has been under immense financial pressure since the UK’s March lockdown. But some theatre organisations expressed concerns that the restrictions on capacity would leave theatres financially unviable.

The move marks a shift to stage four in the government’s five stage plan to control the reopening of theatres and other performing arts venues. It is not expected to announce details of when performances can take place without social distancing restrictions — the final stage in its “route map” — before November.

The rules will make for a radically different theatre-going experience. When audiences are welcomed back, the majority of seats will remain empty to keep capacity at safe limits. People will be asked to wear face coverings inside venues and individuals or groups from different households will be seated at a distance from each other.

After each performance, auditoriums will be deep-cleaned and performances staggered to allow this to take place. E-ticketing will be encouraged to reduce the potential for physical transmission.

The ability of venues to absorb the constraints varies widely, but the Society of London Theatre (Solt), an industry body, has said social distancing measures mean auditoriums will have only between 15 and 30 per cent of seats available to sell, far below the 65 per cent or more capacity required by most productions to break even.

Solt and UK Theatre, another sector organisation, argue the industry has an important economic role that justifies government support, with ticket revenue of £1.28bn in 2018 and a workforce of 290,000.

The Theatres Trust, the national advisory body for the protection of theatres, said that while the latest announcement was a step in the right direction, “it is just a small step”.

“The majority of theatres will not be able to reopen while social distancing is still in place and with no decision on this being made until November at the earliest, the theatre sector is still in very grave danger of irreparable damage,” said Jon Morgan, Theatres Trust director.

The government on Friday announced details of a £270m loan scheme for cultural organisations, intended as a lifeline to support struggling institutions until they can regain financial health. 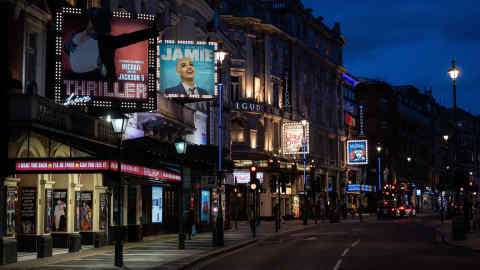 Theatres and other cultural groups can apply for a loan of £3m or more on a payment term of up to 20 years, a repayment holiday of up to four years and an interest rate of 2 per cent a year. Grants are available to qualifying organisations requiring sums beneath the £3m threshold.

The loans will be subject to “rigorous” criteria, according to the guidelines published by Arts Council England, the funding body which will run applications. These include whether an institution has a viable future and its success in making “efficiencies” to date, as well as its national and international reach.

One of those unable to welcome visitors back to its indoor stages is the Royal Shakespeare Company, which said it would continue to confine its performances to its outdoor stages. Gregory Doran, artistic director, and Catherine Mallyon, executive director, said: “The ongoing requirement for social distancing of audiences, as well as of performers, means that we must wait until we reach stage five to plan the reopening of theatres for our full scale indoor productions.”

Others, however, are planning to put on new shows and revive existing ones in spite of the financial pressures brought by opening to diminished audiences.

The National Theatre said on Friday it would reopen its Olivier Theatre in late October, with a new one-person play, “Death of England: Delroy”. Set during lockdown, National Theatre director Rufus Norris described the “explosive” play as “a very English reflection of the Black Lives Matter movement”.

The Bridge Theatre near Tower Bridge will open on August 29 with a new play by David Hare, “Beat the Devil”, about his experience of contracting coronavirus, starring Ralph Fiennes. In September it will stage Alan Bennett’s Talking Heads monologues, with actors including Kristin Scott Thomas, Imelda Staunton and Tamsin Greig. The venue plans to offer 250 socially distanced seats, 28 per cent of its usual capacity.

What Is Business Management