More than half of Boris Johnson’s cabinet are pushing for Downing Street to cut the two-metre social distancing rule to contain coronavirus, in a move that would provide a huge boost to the hospitality industry. Mr Johnson will chair a cabinet meeting on Tuesday and is sympathetic to calls to […]

More than half of Boris Johnson’s cabinet are pushing for Downing Street to cut the two-metre social distancing rule to contain coronavirus, in a move that would provide a huge boost to the hospitality industry.

Mr Johnson will chair a cabinet meeting on Tuesday and is sympathetic to calls to relax the two-metre rule to accelerate the reopening of the economy, but it would involve overriding the government’s scientific advisory group for emergencies (Sage).

“The scientists have been quite firm on this,” said one government figure. “At the moment Sage is definitely not inclined to reduce the guidance.”

Ministers pushing for a shorter distance include members of the “save summer six” group — of which transport secretary Grant Shapps, chancellor Rishi Sunak and business secretary Alok Sharma are all members, amid concerns that retaining the two-metre rule will throttle any incipient economic revival.

Downing Street did not deny reports that Mr Sharma has said many of the 3.5m jobs in the hospitality sector would be at risk unless it is able to take part in the lucrative summer season. Pub and restaurant owners have said their businesses would be much more viable if they did not have to keep people two metres apart.

The official advice from the World Health Organisation is for people to stay one metre from each other during the pandemic.

While Spain and Canada are among countries that have imposed a two-metre distance in line with the UK, other nations have taken a more liberal approach, with a one-metre rule in place in France, China and Denmark. Australia, Germany and Italy are among those that have a 1.5m rule.

“I would suggest that the majority of cabinet is definitely more inclined not to have an automatic two-metre rule,” said one senior minister. “If other countries can do one metre or 1.5 metres why can’t we? What’s so special about the UK?”

Two other government figures said there was a cabinet majority in favour of changing the guidance.

The government has been advised that keeping apart by one metre reduces the risk of transmission to just 3 per cent – with a much greater level of safety at two metres.

But the senior figure said that there was a need for more “nuanced” advice given that many employers were already letting staff work side-by-side or back-to-back at a distance of less than two metres.

Speaking at the daily Downing Street briefing on Monday, health secretary Matt Hancock said: “We keep the two-metre rule under review all the time and Sage have been doing some work on this recently.”

Defending the measure, he added: “The science is clear that the closer you are, the more likely you are to pass on the virus, that’s especially clear when you’re face-to-face.”

On Monday, the UK recorded the lowest number of deaths from coronavirus since before the lockdown was introduced on March 23, as the total number of fatalities reached 40,597.

However, reporting of deaths tends to be lower nationwide on Mondays because of slower record keeping at the weekend. NHS England said a small number of deaths did occur in London hospitals and will be included in the figures over the next few days.

Mr Hancock insisted on Monday that “coronavirus is in retreat” and rejected the suggestion that ministers were considering a “trade-off” between protecting the economy and the public’s health when it comes to easing lockdown measures.

However, some scientists are still concerned the government is lifting lockdown too early over fears the economy is facing a cliff-edge unless it starts to reopen.

Johnathan Ashworth, shadow health secretary, warned on Monday that infections are still running at over 5,000 a day and pointed to evidence the transmission rate of coronavirus across England is beginning to increase.

“Many now fear that the prime minister is starting to throw caution to the wind”, he told the House of Commons on Monday.

A study by Public Health England and Cambridge university published on Friday highlighted regional differences in Covid-19 transmission, including north-west England, where scientists warned the R reproduction number there is probably just above 1, meaning that the number of infections is likely to rise.

Sage has estimated that R for the UK as a whole was in the range of 0.7 to 0.9 and for England 0.7 to 1. Its estimate takes into account 10 different models.

Mon Jun 8 , 2020
The union representing Border Force officers has branded the implementation of the new quarantine rules, which came into force on Monday, as “shambolic” and warned that its members had not had time to prepare to vet travellers arriving in the UK. The government is also facing a threat of legal […] 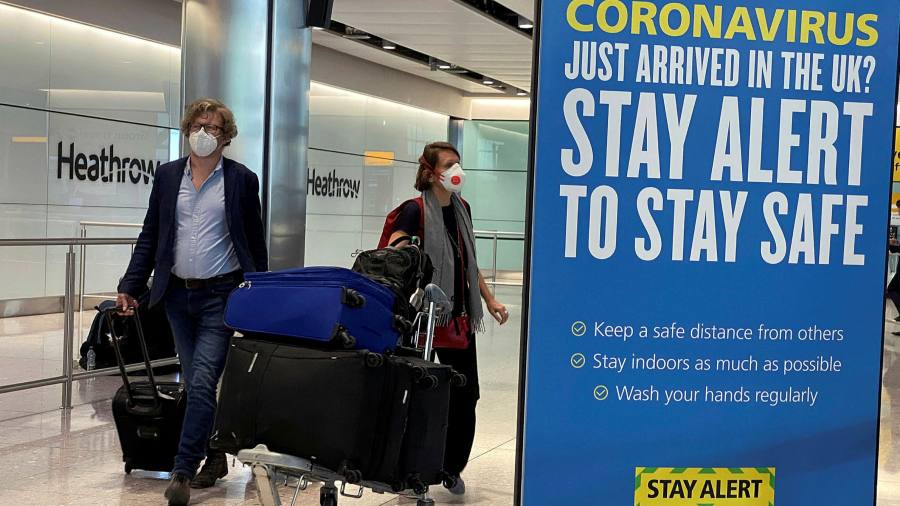