This week I went to the office for the first time in six months, and perhaps the last time in six months. On the train home, I confronted a man who wasn’t wearing a mask. It didn’t go brilliantly. He claimed to be exempt, I didn’t believe him because he hadn’t respected social distancing.

I ended up posting a photo of him on Twitter, then deleting it. In retrospect, I should have acted differently.

Britain is lagging behind on masks. In Japan, people with colds wore masks long before Covid-19. In Rome, you’re stopped if you try to go on the metro or into a supermarket without a mask. In Paris, you’re meant to wear a mask whenever you’re in public unless you’re exercising (or smoking). Even some visitors from the US, where mask-wearing is ideological and regional, can be surprised by how few are worn in the UK.

Boris Johnson explained the UK’s poor Covid-19 record, compared to Germany and Italy, by saying we are “a freedom-loving country”. Come off it, we allow lots of CCTV cameras and support coronavirus restrictions. Most British mask-wearers are more hostile to non-mask-wearers than they are to people with whom they disagree on Brexit.

But who should enforce the rules? Not train staff, who receive enough abuse already. Shops, too, are reluctant to turn away customers. And I discovered that social media shaming is not the way to go.

The problem is that we Brits are reticent. We know there’s a chance that someone might have a valid reason for not wearing a mask; there’s no precise definition of who is exempt.

I am sceptical that most non-mask-wearers on London trains are exempt, especially those who are chatting in groups. (Even severe asthmatics can probably wear a mask.) I think most of the mask-less just can’t be bothered. Their behaviour will undermine others’ commitment, and dissuade people from using trains and going to shops.

So we have the same dilemma that we have when we see a stranger throw litter, or wolf-whistle at a woman on the street, or not give up their seat to an elderly person. We can stay silent, and hope that overstretched police officers or underpaid service workers deal with it. Or we can ask the question — risking awkwardness, but ensuring that flouting norms incurs some peer pressure.

Former prime minister David Cameron dreamt of a Big Society. He failed to understand that the authorities have to give that society a helping hand. With masks, train operators should make a freely-available badge for those with exemptions, as we already do for pregnant women. That would make it hard for people who just can’t be bothered to wear one to claim they are exempt. Transport for London, which runs the Tube, says it is developing one.

Would a badge single out those with disabilities? No: if you don’t wear a mask on public transport, you are already singling yourself out as either exempt or a rule-breaker. Wouldn’t it be better to make clear you are not the latter? A badge would ensure you are not confronted by train staff. It would be no different to a parking blue badge.

I don’t want to live in a society of busybodies. Ministers say that Britons should report their neighbours if they breach the rule of six people at a social gathering. Two-thirds of the public say they wouldn’t, and I’m with them.

Britons are balancing our health concerns with our national shyness. The pandemic should nudge us to talk to each other more.

Fri Sep 25 , 2020
First came the rain, then the temperature dropped precipitously, delivering a chilling intimation of winter to keep drinkers and diners at bay. It was as if the weather in Bristol had been marshalled into supporting the new restrictions on pubs and restaurants that came into effect across England on Thursday […] 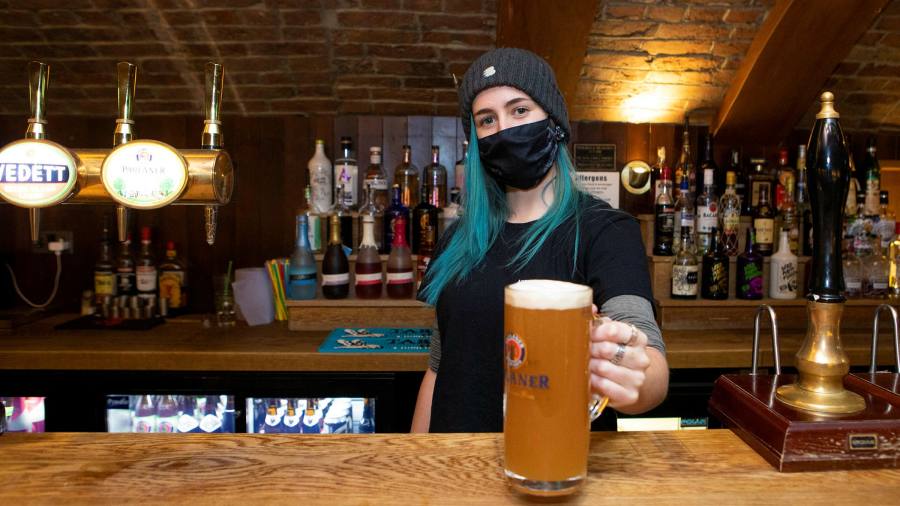