Britain has “shunned” EU offers to make headway in negotiations over the future relationship, the bloc’s chief negotiator claimed on Wednesday, as he accused London of wanting to turn Europe’s fishermen into a “bargaining chip” in the talks.

The scathing comments by Michel Barnier followed talks in London with UK chief negotiator David Frost on Tuesday — discussions that Mr Barnier said has failed to end the impasse that has dogged talks over the summer.

Speaking at an event organised by the Institute of International and European Affairs, an Irish think-tank, on Wednesday, Mr Barnier dialled up his criticisms of Britain’s approach to the trade talks. He said the UK had “not engaged constructively” with EU red lines and accused London of a “lack of engagement” on core issues.

Asked about his latest talks with Mr Frost, Mr Barnier said, “we didn’t see any change in position” from the UK.

The remarks were Mr Barnier’s riposte to repeated complaints from the UK government that the last round of negotiations, in August, were plagued by Brussels’ insistence on parallel progress in different aspects of the talks: the idea that progress could only be made on trade in goods and services if advances were also achieved on EU concerns such as fishing rights and rules on state aid.

With both sides seeking to heap pressure on the other ahead of the next formal negotiation round, scheduled to take place in London next week, Mr Barnier countered that the question of state aid, and other “level playing field” conditions for business, were indelibly bound up with the terms of market access.

“The UK’s proposals on air transport would allow British airlines to operate inside the EU without having to respect the same labour and environmental standards,” he said. “In the area of energy, the UK is asking to facilitate electricity trade without committing its producers to equivalent carbon pricing and state-aid controls.”

He highlighted a recent speech by James Bevan, chief executive of the UK Environment Agency, as evidence of why the EU needed guarantees concerning future British behaviour. In last month’s speech, which was largely about the benefits of regulation, Mr Bevan urged a post-Brexit reform of EU water quality standards, saying they “can underplay where rivers are in a good state”.

One UK official hit back, accusing Mr Barnier of “a deliberate and misleading caricature of our proposals aimed at deflecting scrutiny from the EU’s own positions which are wholly unrealistic and unprecedented.

“For our part, we have been consistently clear that we are seeking a relationship that respects our sovereignty and which has a free trade agreement at its core, similar to those the EU has already agreed with like-minded countries.”

UK officials said Brussels was seeking to impose bespoke demands out of step with other EU trade deals — including on state aid and fisheries.

Mr Barnier painted a bleak picture of the negotiations on access to British fishing waters, a core issue for the EU. “We are nowhere for the fisheries issue,” he said. “We are still in two opposite positions.”

Mr Barnier’s comments came despite the UK presenting informal “room documents” during the last round of talks addressing certain aspects of the fisheries issue. The Frenchman said the UK position had “not evolved” in recent months and that no new “legal texts” had been tabled by Britain.

Next week’s talks will mark the start of the final phase of negotiations that both sides accept need to be wrapped up by the end of October if a deal is to be in place for when the UK’s post-Brexit transition period expires at the end of the year.

“I still have hope,” Mr Barnier said. “I continue to think that Prime Minister Boris Johnson wants an agreement with the EU.”

The UK government is expected to produce a statement of intent on state aid either at the end of this month or in October that — in theory — could help to break the stalemate between the two sides. 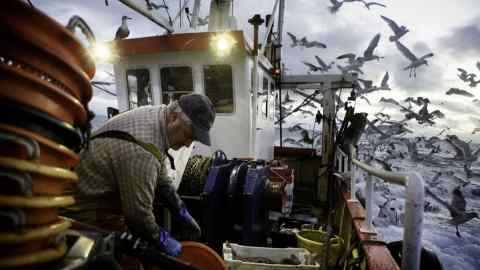 Dominic Cummings, the most senior aide in Downing Street, has previously insisted that the UK should have virtually no state aid regime, enabling the government to throw money at ailing industries or companies.

That intransigence led to huge rows last year with other ministers including Sajid Javid, former chancellor, and Andrea Leadsom, former business secretary. They had hoped to be able to sign up to an EU-style state aid regime that would include loopholes enabling certain interventions to help a select few industries.

Philip Hammond, Mr Javid’s predecessor as chancellor, warned this week that the UK risked being on “a fast track back to the misery of the 1970s” unless the government adopts clearly defined post-Brexit state aid rules.

Officials say the UK’s final position is “still being worked on”, despite the pressing timeframe of the Brexit talks.

Wed Sep 2 , 2020
Boris Johnson warned on Wednesday that the UK’s economic outlook was “about to get tougher” as chancellor Rishi Sunak admitted tax rises would be required to pay for the economic chaos wrought by coronavirus. The chancellor and prime minister addressed Conservative MPs in an effort to improve party relations after […]