BRUSSELS (Reuters) – The European Union should use its long-term budget to drive economic recovery from the coronavirus outbreak, two top officials with the bloc said on Wednesday, likely triggering more internal battles over who pays for it.

Already facing a funding gap left by Britain’s exit from the European Union, richer states such as Germany resisted increased spending even before the coronavirus crisis, more recently delaying decisions for a temporary economic recovery fund.

“The next European budget has to be the European answer to the corona crisis,” von der Leyen told a news conference with EU Council President Charles Michel, who will chair a videoconference summit of the bloc’s leaders’ on April 23.

“To be able to do that, it has to be different, completely different from normal European budgets,” she added.

The exact detail, however, is missing for now.

The Commission is currently discussing how big the next budget will be, how to spend it and to what extent it could be used as a financial vehicle to raise more money for recovery. Any proposal needs the approval of all 27 EU member states.

Michel also called for a “Marshall Plan”, alluding to Europe’s reconstruction after World War Two, and said EU leaders must consider reworking plans for the 2021-27 EU budget during their video conference.

“We’re not talking about a billion (euros), we’re talking about a trillion, looking at the investment initiative that has to be done,” von der Leyen said, without giving more detail.

Negotiations on the EU’s next long-term common budget, which is worth about 150 billion euros a year, were launched two years ago along familiar battle lines: France seeking to protect farm subsidies and the Netherlands wanting a smaller budget than when Britain was a member.

But the coronavirus’ destructive impact has shifted the debate away from whether the EU should spend more on common defence and technology to helping euro zone governments such as Spain and Italy facing the economic shock of long lockdowns.

Von der Leyen also appeared to suggest a bigger EU budget would remove the need for jointly-issued debt by euro zone governments, which the Netherlands and Germany oppose.

The budget has proven to be the “best instrument for cohesion and convergence”, von der Leyen said, using EU jargon for levelling up differences between richer and poorer states.

Euro zone finance ministers agreed a 500 billion euro plan to support coronavirus-hit economies last week. However, to the disappointment of several states led by Italy, the deal did not include using joint debt to finance the economic recovery.

EU leaders are expected to discuss next week whether to develop a financial vehicle to borrow funds on capital markets and then use them to attract private money for investment.

Von der Leyen said that the EU executive should run any such recovery fund, a contentious idea given that it would contain EU states’ money.

Von der Leyen said one way to handle the common budget differently would be to make much of the money available quickly, injecting as much funding as possible in the first part of the seven-year scheme.

Separately, the EU will organise an online donor conference on May 4 to raise funds for the search for a vaccine for the novel coronavirus. The Commission said it did not have a target amount but that 8 billion euros was needed.

The Brussels-based EU executive also called on member states to coordinate their gradual easing of lockdowns to prevent any new spikes of the coronavirus epidemic.

Amazon to close French warehouses until next week after court order

Wed Apr 15 , 2020
PARIS (Reuters) – Amazon will close its warehouses in France until at least early next week after a court ordered it to limit deliveries to essential goods such as food and medical supplies. FILE PHOTO: A truck bearing the Amazon Prime logo arrives at the Amazon logistics center in Lauwin-Planque, […] 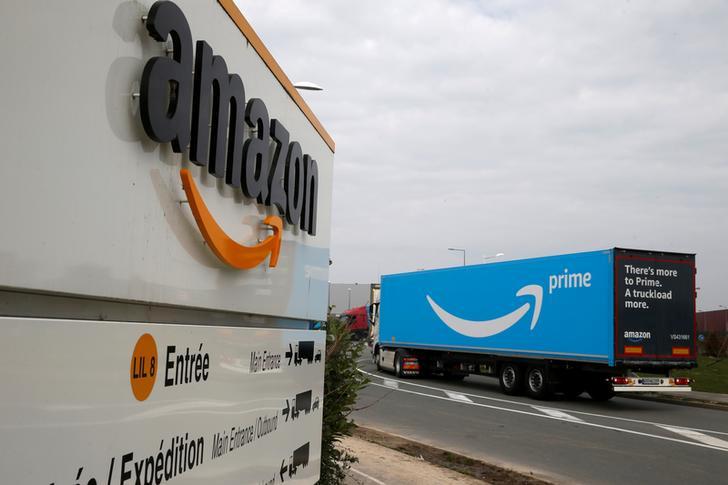