Nicola Sturgeon has revived plans for a possible second Scottish referendum on independence from the UK, pledging to publish draft legislation for a new vote before next May’s elections for the parliament in Edinburgh.

Scotland’s first minister and leader of the ruling Scottish National party put on hold plans for a second referendum bill in March because of the coronavirus crisis.

Recent opinion polls suggest that for the first time a sustained majority of Scottish voters would back leaving the UK in a second referendum, a result that would reverse the 2014 vote which rejected independence by 55-45 per cent.

The approach by Boris Johnson’s UK government to Brexit — dismissing Scottish concerns despite a sizeable majority of the country voting to remain in the EU — and the perception that Ms Sturgeon has handled the coronavirus pandemic better than the prime minister, appears to have strengthened support for the pro-independence SNP.

Polls suggest the SNP is on course for a landslide victory in elections for the parliament in Edinburgh.

Any unilateral preparations for an independence referendum are largely symbolic because the UK government maintains that Westminster’s approval would be needed for such a vote. Ms Sturgeon has repeatedly made clear that she wants any plebiscite to be legally incontestable.

However, the revival of plans for the bill is likely to turn the focus of Scottish politics back towards the constitutional question after months in which Ms Sturgeon has focused on dealing with the pandemic.

“The combination of the impact of the pandemic and the UK’s exit from the European Union demonstrate areas where the limitations on the powers of the Scottish parliament restrict our ability to protect and renew Scotland,” the programme for government said.

“That is why, before the end of this [Scottish] parliament, we will publish a draft bill for an independence referendum — setting out the terms of a future referendum clearly and unambiguously to the people of Scotland.”

Douglas Ross, the new leader of the Scottish Conservatives, criticised the plan to prepare the draft bill, which the SNP government said would set out a timescale and proposed question for the a second referendum.

“We need to take Scotland forward and recover from this crisis together, not go back to the divisions of the past,” Mr Ross wrote in a tweet.

Ian Murray, Labour’s only member of the UK parliament for a Scottish constituency, said Ms Sturgeon’s “reckless” announcement showed her top priority was “to divide the people of Scotland”.

“Reopening the constitutional debate will do nothing to help our NHS recover from the pandemic, or help the children who have lost months of education, or help grow our economy,” Mr Murray said.

Boris Johnson quizzed over claim workers have returned to offices

Tue Sep 1 , 2020
Boris Johnson has claimed that “huge numbers” of people returned to work on Tuesday, despite data suggesting a large proportion of staff are still working from home. In pre-recorded remarks, the prime minister told his weekly cabinet meeting that offices were seeing a marked uptick in the number of workers […] 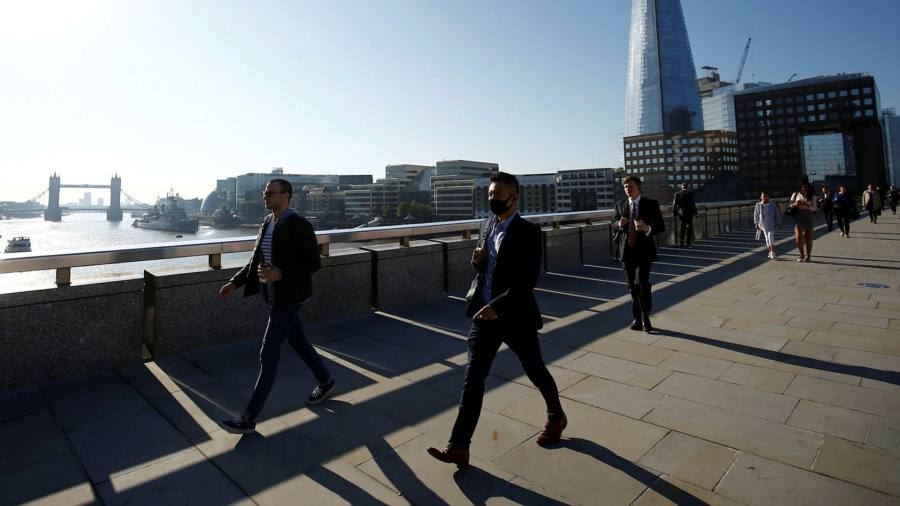