The price of securing crucial standby electricity generation for next winter has soared to record levels, reflecting Britain’s tighter supplies as more ageing nuclear power stations close and the few remaining coal-fired plants are phased out.

The prices bid in Tuesday’s “capacity market” auction hit their highest levels since the process was introduced by the UK government in 2014. The auctions award contracts to generators to be available to meet demand if it unexpectedly spikes in the colder months.

The standby capacity process was introduced because of Britain’s increasing reliance on weather-dependent renewable sources of energy. There are several types of auctions, with most back-up generation secured several years in advance.

But the government also holds a final capacity auction each year to ensure sufficient power generators will be on standby to turn on at short notice in the following winter.

All capacity in the auction on Tuesday for the winter of 2022-23 will be contracted at £75 per kilowatt, a record level. Energy consultancy Cornwall Insight said the highest price in previous comparable auctions was £45.

The amount paid is ultimately passed on to customers and, although the cost only accounts for a tiny fraction of domestic bills, the sharp rise in procuring the standby capacity comes as energy prices for households are soaring.

Industry regulator Ofgem announced a 54 per cent jump in the average bill for more than 22mn households from April due to high global gas prices and customers are expected to face another sharp rise in October.

The latest auction was for about 5 gigawatts of capacity, which means the total cost to customers could be as high as £375mn. Analysts said the level of the bids had jumped sharply because the capacity sought was higher than in previous years and exceeded the amount that was eligible to enter. This meant every generator was guaranteed a contract so could bid the highest possible price. 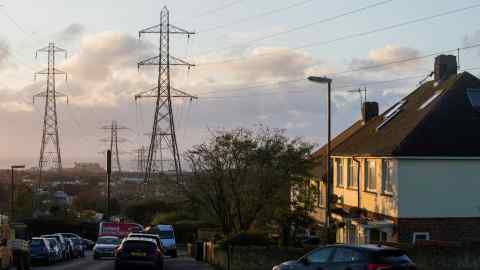 Business secretary Kwasi Kwarteng said last month that he wanted to procure nearly 5.4 gigawatts through the auction to reflect the “broader uncertainties within the power sector”.

Analysts said in practice this reflected the continued decline in Britain’s nuclear power generation and the loss of some large gas stations during the coronavirus pandemic when demand for electricity fell sharply. There is also uncertainty about whether some new generating capacity can be built on time given global supply chain problems.

“We are seeing the results of a lot of nuclear closures,” said Richard Howard, research director at the consultancy Aurora Energy Research, adding that some large gas-fired power plants that have been mothballed since 2020 also remain unavailable.

Britain has just six operational nuclear plants after Hunterston B in North Ayrshire closed last month with another — Hinkley Point B in Somerset — due to follow in July. Four of the remaining five are scheduled to shut by March 2028 at the latest.

Tom Edwards of Cornwall Insight said Britain’s policy to phase out its remaining coal-fired power stations by October 2024 was also “biting”. The Ratcliffe-on-Soar plant in Nottingham was the only coal plant to enter the auction.

Tue Feb 15 , 2022
If you are bringing your brick and mortar store online or planning to launch an eCommerce retailer, having a advertising technique in place would improve your possibilities of success. Search engines like google and yahoo comparable to Google and Bing use bots to crawl pages on the net, going from […]