The energy scene is littered with the debris of grand visions and bold initiatives. When you hear the words: “I can announce today that the UK government has decided to be a world leader in . . .” there is the ominous thought that winners are being picked again.

This time it is UK prime minister Boris Johnson’s turn. Last week, in a keynote initiative announced at the Conservative party conference, he championed offshore wind, hydrogen and carbon capture and storage — all accompanied by historical flourishes about the wind in Francis Drake’s sails and replicating in wind Saudi Arabia’s oil wealth.

Behind the hyperbole, though, is there substance to what Mr Johnson said, and was he right? The answer is that he mainly was, but not for the reasons he gave. Energy policy should not be a playground for short-term job creation schemes, which usually end badly. Energy policy must be long term, and climate change policy must be global.

The day of reckoning on energy and energy policy is fast approaching. The UK legislated for a unilateral net zero territorial carbon production target by 2050, its coal industry is now effectively closed and the nuclear fleet is ageing. With the climate change committee’s sixth carbon budget due before Christmas and the delayed COP26 global climate talks in 2021, something has to be done. The long-promised energy white paper must be delivered and decisions taken. Otherwise, the lights might go out and the carbon targets be missed.

If the prime minister wants to address global warming, developing offshore wind and CCS are among the greatest contributions the UK could make. Why? Because the shallow, windy North Sea is one of the best locations in the world for offshore wind turbines. It is also littered with empty oil and gasfields and pipelines, which offers an inherent infrastructure to help pioneer CCS.

The case for hydrogen and nuclear is less obvious. If Germany and France are going to concentrate on hydrogen, should we duplicate that, find a way to work with them, or simply piggyback on their technologies? A rational response would be to have a joint European project, pooling our expertise and money. But Brexit has probably torpedoed that option. As for nuclear, the UK government needs to make some decisions. Either we should do it, and do it properly, or forget it.

Offshore wind and CCS, and possibly hydrogen and more nuclear, are some of the “stakes in the ground” around which to construct a proper energy policy — after two decades of dither and uncertainty. What then needs to be done is to fill in the details? Mr Johnson is good at willing the ends, if only vaguely. But unless he also wills the means we will have just waffle, again.

When it comes to means, there are three big tasks: ensuring the infrastructure is in place to deliver them; setting the carbon price; and bedding all this within an appropriate regulatory and institutional structure.

None of this is rocket science. If electric cars are to be fast-tracked, then there must be a comprehensive charging network and adequate electricity transmission and distribution networks. If the depleted wells and pipelines of the North Sea are to form a CCS industry, planning and co-ordination are needed. If hydrogen is to play a serious part, it will need a system architecture and regulation. If nuclear is to be built, there must be a clear funding system.

All this requires a regulatory body and a government department fit for purpose. Ofgem and the Department for Business, Energy and Industrial Strategy are not, as they were designed for a different time and different priorities.

Energy taxation is a mess. Now is the time to introduce a carbon tax, common across energy, transport and agriculture, and applied at the border. Net zero cannot be delivered by the power sector alone. Transport emits the most and has made almost no progress since 1990. Agriculture, which accounts for just 0.6 per cent of gross domestic product but about 10 per cent of emissions, is the biggest relative polluter. Unilateralism can only guarantee that we no longer cause climate change if the carbon price applies to imports too, so there is a level playing field.

Mr Johnstone’s speech could go down as yet more bluster — or worse, lead to expensive mistakes like his scrapped London water cannons and abortive Garden Bridge. Or it could be the start of the development of an overdue energy policy and a sensible, practical plan to achieve net zero.

Fixing energy could be a great legacy for the prime minister. But he must will the means as well as the ends, and pay for it too, since his new “red wall” voters in the industrial areas of northern England and the Midlands are hardly in a position to pay.

Sun Oct 11 , 2020
Mayors and council leaders will be given greater control over the Covid-19 test-and-trace system in an attempt to get the problematic £10bn programme back on track, the government announced on Sunday. The news came as England’s deputy chief medical officer warned that the country had reached a “tipping point” similar […] 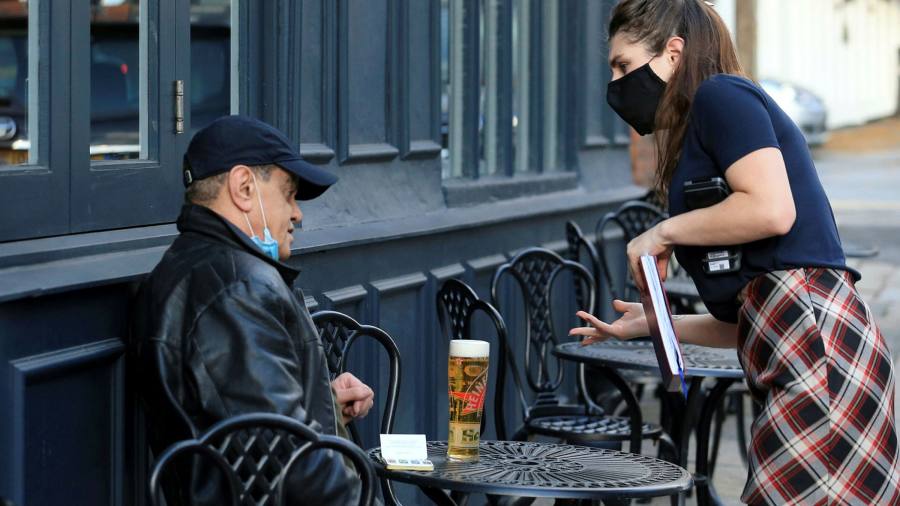