The Covid-19 pandemic has given us a rare insight into the power dynamics in supply chains under stress. When demand plunged for new clothes, for instance, many retailers (with notable exceptions, such as H&M and Inditex) acted swiftly to push as much pain as possible downwards.

UK retailer New Look told suppliers it was suspending outstanding payments owed to them indefinitely. In Bangladesh, a study found that half of garment suppliers had the bulk of their in-process, or already completed, orders cancelled. Of those, 72 per cent of buyers refused to pay for raw materials, such as fabric, that the supplier had already bought, and 91 per cent would not pay for the production cost. More than 1m garment workers in Bangladesh were fired or furloughed as a result of order cancellations and buyers’ failure to pay for them.

Retailers shape outcomes for workers in normal times, too. While they tell suppliers to comply with audits and labour laws, many simultaneously insist on short lead-times, low prices and unpredictable order flows that push suppliers in the opposite direction, according to a study by the International Labour Organization. There is often a power struggle within companies. “Ethical managers approve factories . . . but if you have a very strong buying director, they’ll just overrule it,” the chief executive of one retailer told me.

The power of retailers is particularly clear in the case of Boohoo, a UK fast-fashion brand dominant in the city of Leicester. Most factories there work for the company, and many don’t produce clothes for anyone else, according to an investigation this year by Alison Levitt, a lawyer commissioned by Boohoo to examine allegations of illegally low pay and dangerous conditions in its Leicester supply chain.

Although Ms Levitt found the allegations were “substantially true” and the problems “endemic”, and that senior Boohoo managers had known about their severity since at least December 2019, the company is not legally liable because it does not employ the workers who make its garments.

That may be set to change. A number of European countries are drafting laws that would hold companies liable for human rights breaches in their supply chains, unless they can show they undertook reasonable due diligence to prevent them. France’s “duty of vigilance” law is already up and running, and there are versions in the works in Switzerland, Finland, Norway and Germany, as well as a proposed EU law. Campaigners in the UK are lobbying for a similar law, to be modelled on the 2010 Bribery Act.

For Duncan Jepson, managing director of Liberty Shared, an NGO focused on anti-people trafficking, the key is to stop companies thinking of these issues as a matter of ethics. “Labour abuse in supply chains should be to manufacturing what money laundering is to banking, ie a largely criminal matter caused by weak management, governance and internal controls,” he says.

Previous laws have led to bureaucracy for companies and juicy fees for consultancies, but little meaningful change. The UK’s 2015 Modern Slavery Act, for example, requires companies to publish a statement about the risks of labour abuse in their supply chains. An independent review in 2019 found that a number of companies treated it as a “tick-box exercise”, and 40 per cent had not complied at all.

Boohoo has an eight-page modern slavery statement on its website. Co-founder Carol Kane told a parliamentary committee in 2018 that it worked with 94 suppliers and 76 “cut, make and trim” units in Leicester, and had a three-person compliance team in the city paying monthly unannounced visits.

But Ms Levitt found that Boohoo actually had roughly 500 companies in its supply chain in the city. There was only one in-house Leicester-based compliance auditor, except for an 18-month period where there were two, and his visits were generally “announced and expected”. During the UK’s lockdown, when Boohoo pushed a huge number of orders through its Leicester suppliers, he was put on furlough.

For the new laws to be effective, then, the tick-box approach will have to end. Companies shouldn’t be suddenly liable for every bad apple on the far reaches of their supply chain, but they should know that their defence in court will rest on the seriousness of their due diligence, not the glossiness of whatever they wrote on their website.

Anna Triponel, a lawyer and consultant, says effective laws would also level the playing field between those companies that do the right thing and those that undercut them.

But governments should not expect these laws to fix everything. As Mr Jepson points out, western European countries are “elegant lawmaking machines, but so poor on enforcement”. In Leicester, Boohoo is right to point out that the UK government has failed for years to enforce its own basic laws on the minimum wage and health and safety.

The aftermath of the Leicester saga has been revealing. No one in government has resigned or been fired; the same is true at the top of Boohoo. The company’s share price is recovering. Ms Kane and her co-founder, billionaire Mahmud Kamani, will share a £100m bonus in three years if it continues its ascent. To my knowledge, just one person has been held accountable for the Leicester mess: a factory worker with a fake ID. He was jailed for 12 months.

Tue Oct 13 , 2020
Business associations reacted angrily on Tuesday after a government minister in charge of Brexit border preparations accused them of taking a “head in the sand approach” to the coming border frictions with the EU. Theodore Agnew, a minister working on preparations for Brexit at the Treasury and Cabinet Office, told […] 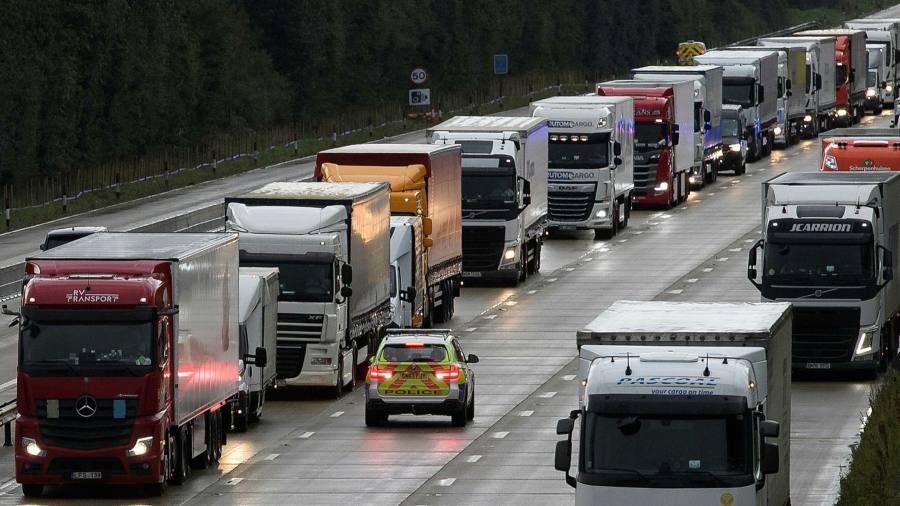