Chancellor Rishi Sunak is considering a cut to value added tax to boost consumer spending and help the hard-hit hospitality sector as pressure mounts on the chancellor from business groups and his own MPs to take early action to support the UK’s economic recovery.

The plans under discussion, confirmed by Treasury officials on Sunday, come as Boris Johnson’s government prepares to scrap the two metre social distancing rule and replace it with “one metre plus” guidelines that will probably include further use of masks and physical screens.

But the move to temporarily lower VAT at considerable cost to the exchequer comes with a sting in the tail, as Mr Sunak is also working on plans for deferred tax rises and cuts to public spending in an Autumn Budget.

There are still serious misgivings in the Treasury over the effectiveness of cutting VAT as a stimulus and officials say decisions on the move have not yet been taken.

But there has been more impetus to reduce VAT in recent days as those close to the chancellor feel the benefits to confidence of a temporary reduction in the 20 per cent rate might outweigh the costs.

Also under consideration in Number 11 is a plea from the hospitality and tourism industries to lower the rate of VAT specifically on pubs, restaurants and hotels.

A specific lower rate for the sector is allowable under European rules and would retain more of the benefits of any VAT cut in the UK rather than it leaking abroad.

Any action to lower VAT rates or other taxes would come after the government loosens social distancing rules. Health secretary Matt Hancock said on Sunday the government would announce further relaxations which would come into force on July 4.

Mr Hancock told Sky News that the government was “on track” to deliver its plan to further reopen the economy and did not rule out hairdressers reopening on July 4. “We talk about hospitality and outdoor hospitality in that plan but there are a whole series of other services especially where you need to be physically close to someone to carry it out like a haircut — a lot of the country does need a haircut.”

Although Whitehall officials said that there were “encouraging” signs from Downing Street about reopening the tourism industry and hospitality sector, government insiders cautioned that shared facilities — such as hotel gyms and public bathrooms — remain a problematic issue that need to be worked through. Further details are expected in the middle of this week.

The Treasury wants to closely monitor the level of spending to gauge whether the public needs a tax cut to encourage them to return to more normal economic life.

But the pressure from business is growing. In a letter to the chancellor seen by the FT, Helen Dickinson, chief executive of the British Retail Consortium, said that “a temporary reduction in the headline VAT rate and in income tax for lower earners would boost consumer demand and raise consumption”.

Kate Nicholls, head of UKHospitality, which represents the sector, added: “It does need a big bold intervention.”

The chancellor is currently considering what stimulus measures to announce in a summer statement, expected in early July and what should wait until a full Autumn Budget which will set the government’s plans for the public finances for the next four years.

Officials in the Treasury worry that VAT cuts do not represent good value for public money because much of the benefit flows abroad. If the chancellor decides on a cut in the coming weeks it will be in a bid to boost general confidence.

But while most Tory MPs expect a summer of stimulus, some are warning the Autumn Budget should also include deferred tax increases and spending cuts to stabilise the soaring level of public debt.

Mr Sunak has promised to set out an economic framework for the rest of the parliament in the Autumn Budget, which is set to accept the rise in public debt to around 100 per cent of national income, but which will also set it on a gentle downward trajectory in the medium term.

Neil O’Brien, MP for Harborough and former Treasury adviser, said: “We simultaneously need a stimulus now to fight recession, but also need to roll the pitch so that we can deal with very high levels of debt”.

Another former Tory minister said that the public finances were so stretched that a fiscal tightening would be necessary before long: “The public aren’t going to like it but it feels like either spending cuts or tax rises are going to be necessary soon.”

Sun Jun 21 , 2020
The UK government will immediately tighten takeover laws to ensure British businesses critical to tackling the coronavirus pandemic are less susceptible to hostile foreign takeovers owing to the economic downturn. On Monday, business secretary Alok Sharma will amend legislation to allow the Department for Business, Energy and Industrial Strategy to […] 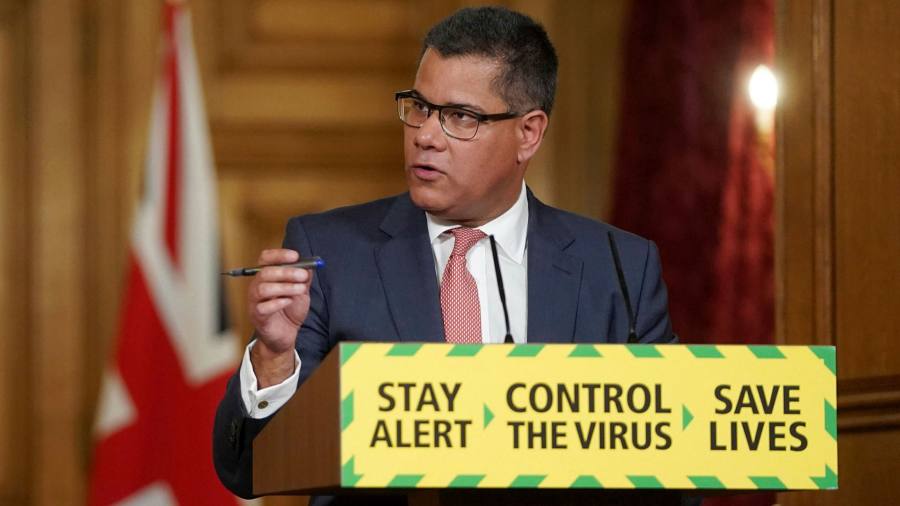