Rishi Sunak has set out plans to stave off mass joblessness in Britain, extending a £6.8bn support package for the self-employed and confirming massive wage subsidies for employees until the end of October.

The chancellor said the package of measures, that are more generous than had been expected, will act as a “lifeline” for millions of jobs and businesses blighted by the coronavirus lockdown, as ministers pin hopes on an economic upturn in the autumn.

Boris Johnson is discussing with ministers a big job creation scheme, possibly to be announced before the summer break, focusing on upgrading infrastructure.

“We are trying to identify shovel-ready projects — we want to get a move on with this,” said one minister. Transport projects and environmental schemes are among the priorities.

Unemployment could rise by 2m due to the coronavirus crisis, according to the independent Office for Budget Responsibility, and has become a major focus for Mr Johnson. Gavin Williamson, education secretary, is drawing up a skills package to retrain workers, particularly the young.

The Treasury is planning a Budget in the autumn but government officials have not excluded the possibility of a pre-summer economic statement, setting out the second phase of the government’s economic response to the crisis.

Mr Sunak on Friday announced what are expected to be the final stages of his emergency support package for the jobs market. By the autumn, as state subsidies are withdrawn, the true scale of the unemployment crisis will become clearer.

The chancellor announced that the self-employment income support scheme — which has so far cost £6.8m and has covered lost trading profits of up to £2,500 a month for three months — would be extended to cover another three months.

There have so far been 2.3m claims under the scheme. Mr Sunak announced those eligible would be able to claim a second and final grant in August, capped at £6,750 in total, a cut in support to 70 per cent of profits.

The extended support for the self-employed is more generous than some expected — until Friday Mr Sunak had not committed to continuing the scheme at all — and reflected the chancellor’s concerns about the continuing malaise in the economy.

Mr Sunak also revealed details of how he will operate the final stages of the job retention scheme for furloughed workers — which has helped protect 8.4m jobs with 1m employers — which will be wound up at the end of October.

The scheme will be made more flexible to allow furloughed workers to be brought back part-time in July, while a new taper will mean that employers will only have to make initially modest contributions to the cost of the scheme from August 1.

Under the scheme, which pays 80 per cent of wages of furloughed staff, employers will gradually pick up more of the wage bill from August 1, starting with employer national insurance contributions and pension contributions — for the average employer this would amount to 5 per cent of employment costs.

By October the government would pay 60 per cent of wages up to a cap of £1,875. The Treasury said the scheme would end on October 31 and would not be extended.

Mr Sunak said: “Our top priority has always been to support people, protect jobs and businesses through this crisis. The furlough and self-employment schemes have been a lifeline for millions of people and businesses.”

Fri May 29 , 2020
Families and friends from separate households will be able to meet outdoors for the first time in two months from Monday as part of the Welsh government’s ultra-cautious approach to easing the coronavirus lockdown.  But they will be able to do so only within a five-mile radius of where they […] 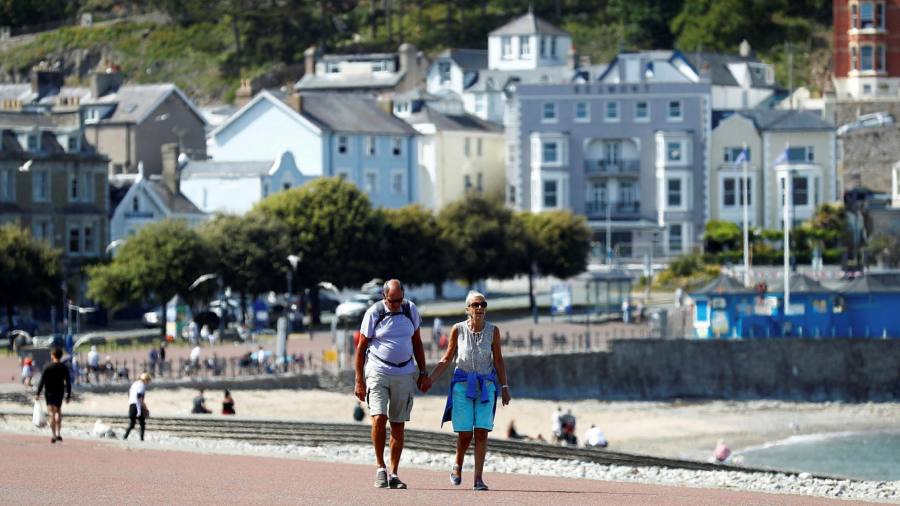