The UK Serious Fraud Office will conduct a review into its director’s behaviour after a judge accused her of falling for “flattery” and letting a “freelance agent” acting for potential suspects become involved in a probe into alleged corruption in the Iraqi oil industry.

The allegations against Lisa Osofsky were in connection with the agency’s investigation into Monaco-based oil consultancy Unaoil. They were made public on Monday as it was announced that the SFO had secured the convictions of two British businessmen in relation to its probe.

Ms Osofsky, an American former FBI lawyer, exchanged emails and texts with David Tinsley, a retired US Drug Enforcement Administration agent and founder of intelligence agency Five Stones, who was acting for three members of the Ahsani family, which founded and ran Unaoil.

Mr Tinsley contacted Ms Osofsky in September 2018, according to a legal ruling made public on Monday, and promised to secure guilty pleas from two former Unaoil executives who worked under the Ahsani family despite having no official role in the case.

According to the ruling, Mr Tinsley offered to obtain the guilty pleas as part of an effort to persuade the SFO to withdraw arrest warrants for the three Ahsani family members so they could pursue a plea deal in the US.

Lawyers for Unaoil’s former Iraq territory manager Ziad Akle said Mr Tinsley had tried to persuade their client to plead guilty in meetings behind the backs of his lawyers along with Basil Al Jarah, another Unaoil employee. Mr Al Jarah pleaded guilty in the UK last year to five counts of bribery. The SFO said Mr Al Jarah had made those pleas freely.

Mr Akle, 45, and 64-year-old Stephen Whiteley, former vice-president of Unaoil client SBM Offshore and later Unaoil’s Iraq regional manager, were found guilty of paying more than $500,000 in bribes to secure oil contracts in war-torn Iraq. Mr Akle’s offences spanned 2005 to 2010 while Mr Whiteley’s took place in 2009 and 2010. The SFO will pursue a retrial against a third defendant, Paul Bond, a former executive with SBM Offshore, on whom the jury could not reach a verdict.

In a January hearing Mr Akle sought to have the case thrown out on the basis that the SFO had breached his right to a fair trial. Judge Martin Beddoe allowed the case to continue but criticised Ms Osofksy for “taking the bait” and allowing Mr Tinsley to contact defendants in the case.

In his February ruling, made public on Monday, Judge Beddoe said: Mr Tinsley was “not hesitant in flattering Ms Osofsky and talking up her talents, and unfortunately Ms Osofsky made herself vulnerable to them.”

He said the events should be “comprehensively reviewed”.

In a statement on Monday an SFO spokesperson said: “We accept [the judge’s] criticisms of the way a contact was handled. A review will be conducted into this matter, and a protocol covering contact with non-legal representatives has been put in place.”

In one communication last year, Mr Tinsley sent Ms Osofsky an article with the message: “Mercy means valuing relationships over rules” to which she replied: “Inspiring”.

Judge Beddoe said the SFO should “have been engaging only with the legal representatives of [Mr al Jarah and Mr Akle] and should have had nothing to do with [David Tinsley]”.

The SFO had originally attempted to prosecute the three Ahsani men — British citizens of Iranian origin who lived in Monaco — but lost out to a competing US investigation.

The agency issued arrest warrants for brothers Cyrus, 51, and Saman Ahsani, 46, and their father Ata, 72, but was thwarted when both sons pleaded guilty in the US last year. The SFO dropped charges against all three Ahsani men and Ata Ahsani has not been charged in the US.

At a court hearing on Monday concerning the retrial of Mr Bond, Judge Beddoe said the Ahsani family members appeared to have “cut a deal . . . to their substantial advantage”.

Lawyers reacted with surprise to the revelations. Jonathan Fisher QC, a barrister at Bright Line Law, said: “[The conduct] is out of alignment with what you would expect to happen in the UK and on any view it looks like a major misjudgment.”

One lawyer at a US firm said: “It does feel like more of an American approach, though not as far as she took it. The DoJ would be more comfortable with this kind of thing. This looks like the sign of a frustrated American trying to impose that system on the UK.”

Mr Al Jarah, Mr Akle and Mr Whiteley are due to be sentenced later this month.

Mon Jul 13 , 2020
The government has published its blueprint for how the UK-EU border will operate at the end of the Brexit transition period. The Border Operating Model (BOM) sets out how British traders will manage imports and exports with Europe after the UK leaves the bloc’s single market and customs union on […] 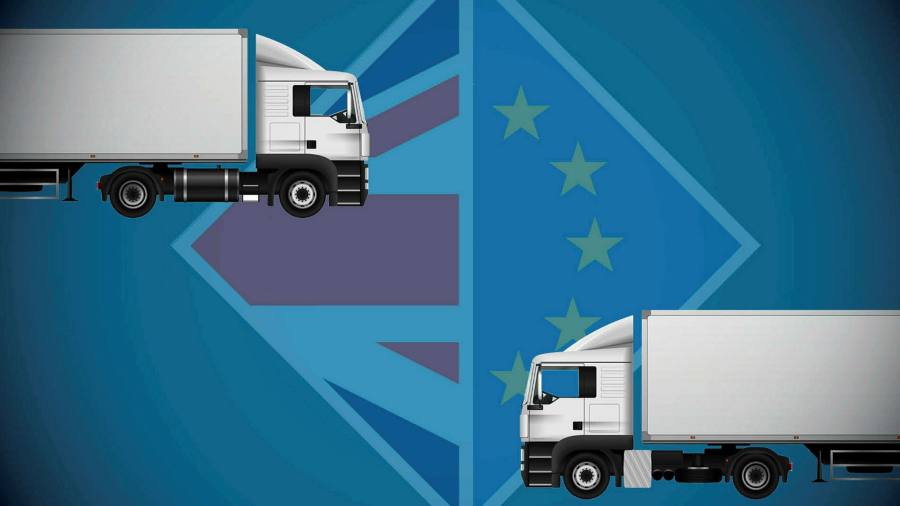