The new climate goals put the Anglo-Dutch company – at least on paper – ahead of the most progressive of its rivals, including BP (BP.L) and Italy’s Eni (ENI.MI).

“Shell now needs to go further with our own ambitions, which is why we aim to be a net-zero emissions energy business by 2050 or sooner.”

Shell said it plans to fully offset carbon emissions from its own oil and gas production by 2050, in what is known as Scope 1 and Scope 2 emissions.

Those emissions do not include the much larger category of greenhouse gases emitted from fuels and products it sells to customers such as jet fuel and gasoline, known as Scope 3.

Shell has not included Scope 3 emissions in its ambition, saying it cannot control the way customers use its products.

However, it will “pivot towards serving businesses and sectors that by 2050 are also net-zero emissions,” which it said means its Scope 3 emissions should be offset.

Unlike its rivals, the ambition applies to all of the products it produces, refines and buys from other companies.

Shell also expanded its broader aim to cut the total carbon emission footprint from energy products its sells, an intensity-based measure, by around 65% by 2050, and by around 30% by 2035.

Shell has rejected setting long-term targets, opting instead for ambitions which its says allow it flexibility to move “in step” with society’s shift away from fossil fuels in order to battle global warming.

Shell did not outline how it plans to change its spending plans in order to meet the new climate goals. Last year it spent roughly 8% of its $24 billion budget on low-carbon energies.

“Shell’s aim is that, in the future, its operating plans and budgets will change to reflect this movement towards its new net-zero emissions ambition,” it said in a statement.

The Anglo-Dutch company also set binding targets to reduce its net carbon footprint in the three years to 2022 by 3% to 4% from a 2016 baseline.

Thu Apr 16 , 2020
FILE PHOTO: A cyclist is seen infront of the Bank of England as the spread of the coronavirus disease (COVID-19) continues, London, Britain, April 14, 2020. REUTERS/John Sibley/File Photo LONDON (Reuters) – British banks expect to lend more to businesses but curb mortgage and consumer lending over the next three […] 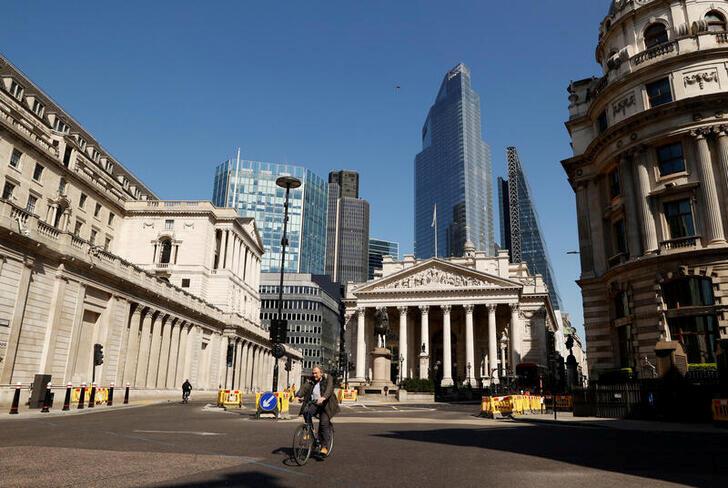