The UK’s smallest businesses have been among the hardest hit by the economic lockdown caused by the coronavirus crisis. Their limited financial resources and often low margins have put them at risk of being among the first to fall. The government has focused much of its support on the smallest […]

The UK’s smallest businesses have been among the hardest hit by the economic lockdown caused by the coronavirus crisis. Their limited financial resources and often low margins have put them at risk of being among the first to fall.

The government has focused much of its support on the smallest operators, with a number of schemes such as the Bounce Back Loan Scheme (BBLS) and the Coronavirus Business Interruption Loan Scheme (CBILS), as well as a range of grants and tax relief.

But many companies have complained of difficulties accessing this money, prompting worries over debt levels and what happens next. Here, the Financial Times talks to six business owners about how they are faring in the middle of the crisis.

The kitchens of Kricket, a collection of popular contemporary Indian restaurants in London, have been cold since the end of March. Staff are furloughed, but only one of the group’s three sites has qualified for the £25,000 retail and hospitality grant, which is limited to properties with an open market rental value below £51,000. Despite landlords and most suppliers’ support, there is still a “slow and steady cash burn wherever you look”, said co-founder Rik Campbell.

“I’m more concerned about when we open — whenever that is — and we don’t have the government’s support but have to operate at 50 per cent capacity,” he said, referring to suggestions that restaurants will have to limit customers to adhere to social-distancing rules and fears that people will be nervous about eating out. “We all know that if a restaurant’s business drops off 20 per cent it’s not making any money.”

Karl and Lindsay Bond’s gin — produced in their family-run distillery in the Peak District’s Macclesfield Forest — is normally stocked at Heston Blumenthal’s restaurants and Harvey Nichols, the high-end London department store. Before the pandemic, the family were renovating a remote pub to open a whiskey distillery. “The business had grown in the last few years in a really nice way,” Mr Bond said. “We’d been very fortunate, we’d never had to take investment or borrow as a company.”

Now, however, with restaurants and department stores shut, the Bonds are anxiously waiting to hear the outcome of their CBILS loan application, which they made more than a month ago. They would also like to apply for the newly launched BBLS scheme but have been told by their bank, Santander, that they would have to cancel their CBILS application to do so. They have not received the £10,000 business rates grant they hoped to because of administrative difficulties at their local council.

With staff furloughed, they have been producing hand sanitiser and offering home delivery and grocery services to try to keep their business afloat. “We can’t get through to anyone who will tell us for certain what grants or loans we’ll get,” Mr Bond said. “The promises on all these schemes sound really good but the reality of getting your hands on it is different.”

Chris Cox, a mind-reading live performance magician and star of the BBC children’s show Chris Cox’s Mind Boggling Magic, had to return home in the middle of a US tour after the pandemic cancelled the end of the run. His expected earnings for the rest of the year’s work — normally between £50,000 and £60,000 — were wiped off his books, and look unlikely to return anytime soon. But because Mr Cox runs his own limited company and pays himself mainly through dividends, he does not qualify for any state support. He cannot furlough himself and recoup his salary because he takes it annually on March 31, after the government’s deadline of March 19.

“The frustration lies in hearing the constant ‘No one will be left behind’ rhetoric,” Mr Cox said. “The government can see my work has been cancelled, they can see I’m in an industry that doesn’t exist at the moment and will be one of the last to come back, they can see from my accounts that my dividends are from my own company not investments . . . And yet I get nothing.”

With two children under the age of three and his wife on maternity leave, Mr Cox’s family is relying on savings. But he said: “It’s very saddening having to eat into all of that.”

With no certainty over when the entertainment industry will reopen, and what it will look like when it does, he may need a loan to cover living costs.

“The galling thing is looking at my bank balance and seeing that before all this started, I’d paid a massive tax bill,” he said. “All this money we’ve put into the economy in taxes has been kicked in our face.”

For 32 years, Lucy Bristow has run her own recruitment consultancy in Bristol. “I’ve survived two major recessions over three decades and I’ve never experienced anything like this before,” she said. “The entire business just disappeared overnight.”

As a limited company director, Ms Bristow pays herself a small salary and takes the majority of her earnings from dividends, an income stream not covered by any of the government’s coronavirus support schemes. Ms Bristow is able to recoup 80 per cent of her salary by furloughing herself, but it is not enough for her to live off. She wants the government to pay 80 per cent of owner-directors’ dividend incomes up to the cap of £2,500 per month that is on offer to employees and the self-employed. “We just want parity and equal treatment,” she said.

Continal Group was started from the back of a farmhouse in Cornwall and is now a supplier of energy-efficient warm-water underfloor heating systems, selling directly to plumbers and builders across the UK and Europe. Just before the crisis, it was due to launch in Germany, Austria, Italy, Switzerland and Holland.

It employs 30 people, with a turnover forecast for the year at £3.5m and a balance sheet that shows a profit every year since it started two decades ago. Founder Chris Ingram said much of its cash reserves had been used to deal with Brexit-related issues, especially with an EU-based supply chain.

“The crisis caught us with our pants down, but the early promises of government help calmed us.”

He applied for a state-backed loan at the end of March but by mid April still had nothing — and so was forced to put almost all staff on furlough.

“But with orders down by 85 per cent in the UK and 100 per cent with our EU operation, we were facing the decision of going into administration.”

He secured an additional £50,000 overdraft, which helped prevent closure for two weeks and managed to agree a loan of £550,000 to pay suppliers.

But he said: “All this has done is increase my indebtedness to the bank. I will be on the hook for a personal guarantee of £110,000. We will survive but only just. We had to pull every string we could to get this loan.”

Cine Power International, a design and manufacturing company producing equipment for the broadcast industry, was having a good year when the pandemic started. The UK film industry had been “exceptionally busy” up to February, and it had been working on the new Mission: Impossible sequels among others. “The industry was buzzing,” according to founder Diane Nyiry. But that stopped overnight.

Cine Power furloughed four of its six staff but needed money to keep paying other future expenses. Ms Nyiry sought about £100,000 through the bailout scheme but was turned down by four lenders — despite showing a small profit and strong order book, including the next Avatar movie being shot in New Zealand.

Two local brokers told her loans were not being awarded because banks preferred their own commercial packages. She approached Coutts — her own bank — but the application form was onerous, she said, with more requirements than the others and demands for extensive accounting paperwork.

“All of which would be extremely costly for little companies,” she said. Last week, she applied for the newly launched ‘bounce back’ loans — and received the money instantly. “I am honestly stunned. That is so incredibly helpful.”

Seize the opportunity of Covid-19 to restructure taxes

Mon May 11 , 2020
Governments have rightly channelled a flood of money to our coronavirus-stricken economies. In an attempt to partly sustain worker incomes and business cash flows as a quarter to a third of the economy is shut down, they are pouring never-before-seen transfers, subsidies and loan guarantees into the private sector, heralding […] 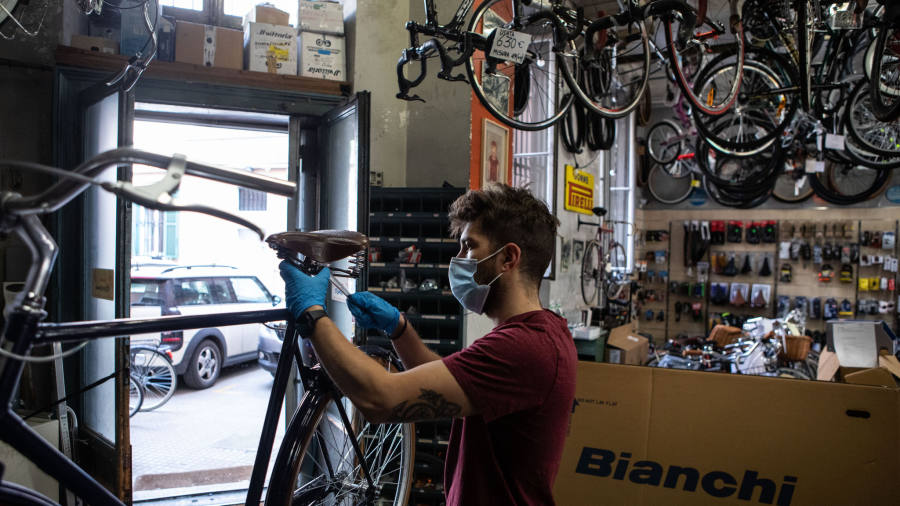