Lenders have been accused of endangering the survival of large numbers of small UK businesses by blocking access to cheap state-backed loans, amid a stampede in demand.

The Financial Times has discovered that many financial institutions have cut access to bounceback loans, designed to get small businesses through the coronavirus pandemic, even though chancellor Rishi Sunak recently extended the scheme until November 30.

As cases of the virus surge and local lockdowns threaten the economic recovery, small businesses fear going bust without financial help. Some 1.2m businesses, almost a quarter of the UK total, have already received them.

Some lenders, including Tide and Conister, have stopped offering bounceback loans but are still counted among the 28 lenders advertised by the UK government.

Businesses that try to switch banks are finding that most will now only accept applications from existing customers — with several banks restricting this to customers who were on their books before the scheme launched in May 2020, including TSB and Bank of Ireland.

HSBC last week said it would not even open accounts for new business customers as it prioritised existing customers.

Of the 28 accredited lenders, only two offer loans to non-customers: peer-to-peer site Funding Circle and Capital on Tap.

Skipton Building Society accepts non-customers but only if they sign up for an invoice finance facility too, which requires credit checks.

Bounceback loans allow companies to borrow up to £50,000 over nine years. State guarantees enable banks to lend with minimal checks.

The government expects SMEs will fail to pay between 35 per cent and 60 per cent of the £38bn lent so far.

As more lenders pull out of the market, businesses are scrambling to switch banks.

Sue, who runs a guest house in southern England and declined to give her surname, was eligible to borrow £5,000 under the government’s rules, but her existing lender, Nationwide, did not offer bounceback loans. “I’ve been let down by Tide, not able to get a business account with Metro or Lloyds and ignored by HSBC,” she said. “I can’t see my business getting a loan, even though I am entitled to one.”

Mr Bounceback, an anonymous northern businessman and philanthropist whose website helps SMEs apply, said: “We’re now on the borderline — every bank still offering loans has a six to eight week wait for new customers to open an account, and if you don’t get one before November 30, you can’t apply for a bounceback loan.

“This is going to kill a lot of businesses full stop — businessmen and women who through no fault of their own have been unfairly denied the right to apply for this financial lifeline.” 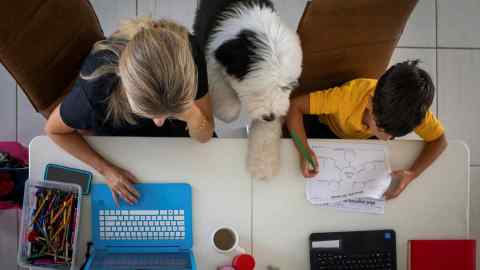 Businesses which were on a waiting list with lenders that have pulled out of the market are finding this snarls up later applications.

HSBC said it needed to prioritise existing customers and had lent £12bn to UK businesses since the government introduced its emergency loans, half of which was in bounceback loans. “As one of the only banks that remained open to applications from all UK businesses since the scheme’s launch, we received a huge level of demand,” the bank said.

One person with knowledge of the situation said it was receiving 10,000 applications a day and could not process them fast enough.

A Treasury spokeswoman said: “Some lenders are inviting applications from new customers, and many of those that are still only open to existing customers are regularly reviewing that position with an eye to opening to new customers as soon as they can.”

We are exploring the impact of the pandemic on young people and want to hear from readers between 16 and 30. Tell us about your experiences from the past six months via a short survey.

Cash-starved SMEs are desperately searching for other sources of help. Local authorities in the north-east of England have had to allocate grants by ballot after being overwhelmed with applications in recent days.

The partnership decided the fairest way to select companies for the grants, worth £1,000 — £3,000 each, was a ballot system run by each of the seven councils in its area.

Mon Oct 5 , 2020
The Laurel tanker and other ships sit in the Singapore Straight off the coast of Singapore, on Tuesday, May 25, 2020. Lauryn Ishak | Bloomberg via Getty ImagesRelated Posts:Live Q&A: Banks block access to bounceback loans Oil prices rose about 2% on Monday, lifted by comments from doctors for U.S. […]