Currency traders have slipped up on Brexit many times over the past four years, but they are relaxed about the prospect of dropping out of the EU’s trade arrangements without a safety net this time around, even as negotiations flounder.

The pound has recovered from the ugly blow it suffered against the dollar when coronavirus ripped through markets in March, hovering close to its highest point of the year just above $1.31. Meanwhile, the options market that companies and investors use to hedge against losses or to profit from exchange-rate shifts suggests sterling faces no big risks in the next six months, even as the clock ticks down to the December 31 exit from the EU’s single market and customs union.

The serenity suggests either complacency or confidence that neither side in the talks would inject more instability into economies already hobbled by the pandemic.

The UK is potentially just four months away from a chaotic departure from the EU’s trade arrangements and progress on talks to provide a safety net is slow. Michel Barnier, the EU’s chief negotiator, last week accused the UK of wasting time following the latest round of talks. David Frost, the UK’s chief negotiator, said a deal was still possible, despite the slow progress between the two sides so far.

JPMorgan analysts said the failure to agree on a trade deal would lop as much as 5.5 percentage points from the UK’s economic growth at a time when the impact of coronavirus had severely dented the country’s performance.

This time last year investors were anticipating more volatility in the pound than in the Mexican peso, judging from options markets. They were right. Now, the same market suggests that the rest of the year will be calmer than usual for the pound. Expectations for large price swings in its exchange rate over three months stand below the average of the past five years and only slightly higher than the euro.

Options enable users to buy or sell a currency on pre-set dates in the future, which means tracking their prices can help to identify when investors and speculators expect flash points to occur. For now, options prices indicate that investors are willing to pay slightly more for contracts that benefit from a weaker pound, but they show no expectations for dramatic moves.

“I’m surprised by how complacent the market is,” said Marco Bonaviri, a senior portfolio manager at REYL & Cie, a Swiss private bank with SFr14bn ($15.4bn) in assets. “Maybe it’s Brexit fatigue, but even if you think there is a 60 per cent chance of reaching an agreement, that’s still a huge risk that’s not priced in.”

For now, investors are choosing to look beyond the latest negative headlines, said Shahab Jalinoos, global head of currency strategy at Credit Suisse in New York. “Every time a round of talks doesn’t go well, the market just looks for a breakthrough at the next round,” he said. Still, any positive or negative surprise “could be quite meaningful for the pound”, he said.

Some of the latest strength in the pound is somewhat misleading; though the currency has cranked nearly 8 per cent higher against the dollar since late June, it has hardly changed against the euro over the same period. That suggests that the rally in the currency is more about dollar weakness than sterling strength, investors said.

The dollar suffered its worst decline in a decade against a basket of its peers last month and its biggest drop since January 2018 on a trade-weighted basis. “The move in sterling has been all about the dollar weakening and we think that the pound is getting vulnerable at these levels,” said Georgina Taylor, a portfolio manager at Invesco. 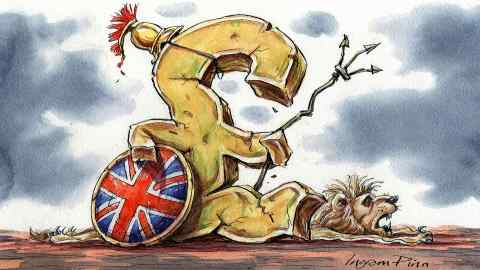 “At some point things like the current account deficit and portfolio flows and the outcome of trade talks will matter, but these risks are not currently priced in,” Ms Taylor said.

The chance that the Bank of England could cut interest rates below zero — while slim — also remains a potential threat to the currency. Mr Bonaviri at REYL & Cie noted that futures markets were pricing in negative interest rates in the UK for next year, “so that discussion will also likely come back and hurt sterling”.

For now, moves in the dollar will continue to dominate the direction of the pound. Mr Jalinoos said if the euro’s climb continued to $1.25, from $1.18 now, the pound could reach as high as $1.35.

How much CGT will we have to pay on our properties?