A flurry of newspaper headlines declaring that the UK chancellor will detonate a “tax bombshell” this autumn has stoked opposition from economists and politicians as parliament returned from recess on Tuesday, spawning theories as to why the issue has come up now.

Rishi Sunak is poised to announce his schedule for a public spending review and Budget in the weeks ahead, knowing that his days as the giveaway king are drawing to a close.

While the Treasury insists no decisions have been taken, the difficult process of plotting a return to sustainable public finances is under way.

Officials are aware that the position on government borrowing is extremely difficult. Public sector net borrowing this year has already hit £150bn in just the first four months of the 2020-21 financial year, almost a record level for a whole year.

Although the latest information on tax revenues and public spending suggests the total will be lower than the £372bn — almost 19 per cent of national income — forecast in early July by the Office for Budget Responsibility, the fiscal watchdog, there is likely to be quite a persistent hole in the UK’s finances, according to almost all economists.

Paul Johnson, director of the Institute for Fiscal Studies, a think-tank, said: “The economy is likely to be smaller in the medium term than we thought and if we keep public spending at the same or a higher level than [previously] planned, we will need higher revenues.”

With no sign Boris Johnson’s government wants to embark on a second decade of austerity, all eyes have turned to tax increases, especially as the UK’s tax burden is considerably lower than many similar-sized European economies.

But while most economists accept the public finances will need to be stabilised, and most likely with tax rises, none think they are needed immediately, especially those affiliated with Conservative think-tanks.

It is “definitely not” the time for tax rises, said Julian Jessop, fellow at the Institute of Economic Affairs. “Fiscal tightening would slow the recovery and there is simply too much uncertainty over the long-term health of the public finances to make important judgments this autumn,” he said.

Robert Colvile, director of the Centre for Policy Studies, said that “growth was key” to the long-term health of the public finances and the chancellor was taking risks even if he only announced future tax increases. “Signalling specific tax rises is as bad as doing them because people respond in advance of them coming in,” he said.

Mr Sunak’s problem, however, is that he has given a commitment to sustainable public finances, and if he does not announce specific policies, the official economic forecasts this autumn will show borrowing far from under control even by the time of the next election.

Gemma Tetlow, chief economist at the non-partisan Institute for Government said the best strategy would be to accept this difficulty but start a debate on the most sensible future tax increases.

“While this government did not run for office on a platform of tax increases, it would seem sensible to prepare the ground,” she said.

“Kite-flying”, or floating tax-raising ideas in the media to see which option raises least opposition, is one of multiple theories that are doing the rounds at Westminster about why Mr Sunak’s tax-raising options have hit the headlines now when his Budget is likely to be many weeks away.

Another is that briefings on the Budget have been conducted by Tory rightwingers keen to awaken a rebellion to quash any thoughts Mr Sunak might have of increasing taxes on higher earners and business.

Separate briefings that Mr Sunak intends to scrap the manifesto commitment to spend 0.7 per cent on overseas aid — a bugbear of the Tory right — were denied outright by Number 10 on Tuesday.

Rob Halfon, a Tory MP who has led the campaign for a freeze on petrol duties, said reports of a planned 5p per litre rise in fuel duty may provide cover “to have a small one”. Treasury officials denied as “rubbish” the suggestion of a 5p rise.

Treasury insiders deny there has been any officially sanctioned kite-flying. But they accept one positive effect of “tax bombshell” headlines is that it reminds MPs that Treasury largesse will have to be repaid. “The public, more than the politicians, are aware of the situation,” said one Sunak ally.

One former Treasury minister said: “Very few on the backbenches have really got their heads around the scale and political pain that is due to land. The medium/longer term economic response will be very problematic for the party in my view.”

In spite of his concerns that a big spike in coronavirus might force him to rein back his plans for a full-scale autumn Budget and spending review, Mr Sunak is currently aiming to deliver a parliament-defining political event.

The chancellor insists that a multiyear spending deal for Whitehall departments — which will fund the government’s “levelling-up” agenda — must be balanced with a plan for sustainable public finances.

Treasury officials accept the logic that a full spending review and sustainable finances implies tax moves have to be “big” and are expected to include an equalisation of capital gains tax rates with income tax rates. Reforms of pension tax relief are also being eyed.

But these will not balance the books and stop underlying public debt rising as a share of national income on current forecasts. That means bigger taxes have to come into play alongside moves such as a temporary suspension of the triple lock on uprating state pensions.

Nick Macpherson, Treasury permanent secretary during the period of austerity in the wake of the financial crash, said: “Sadly raising the tax rate on the most mobile factor of production — capital — doesn’t bring in any revenue. To raise serious revenue, there is no alternative to higher taxes on income or consumption.”

This would mean the middle classes would pay more, according to Mr Johnson at the IFS.

“Compared with similar countries, middle earners are taxed lightly in the UK, mostly because there are lower employer social insurance levies,” he said. “The boring fact is if you want to raise 2 to 3 per cent of national income, then you need to look at income tax, national insurance or value added tax”.

Tue Sep 1 , 2020
The Scottish government has banned social visits between households in Glasgow and two neighbouring council areas in an effort to stem “rapidly rising” coronavirus infections in Scotland’s most populous urban area. The unexpected tightening of restrictions, announced early on Tuesday evening and taking effect at midnight, came at what Nicola […] 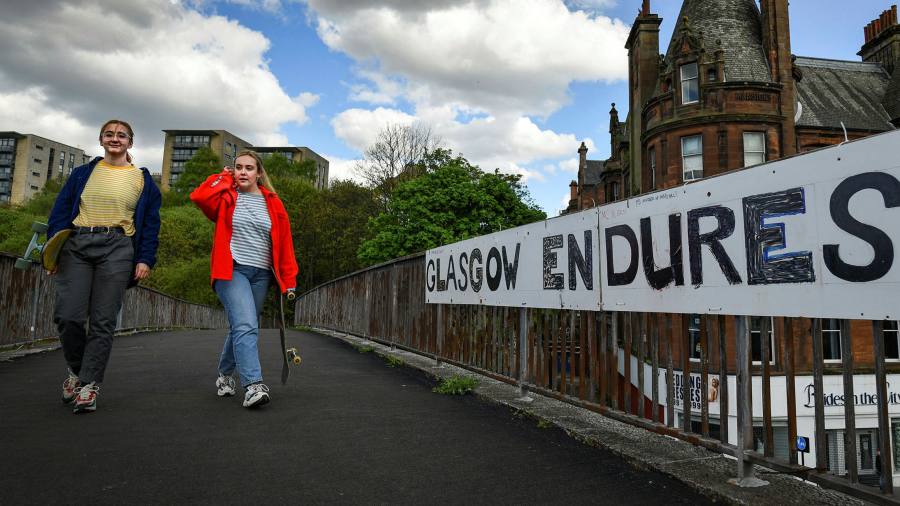