Rishi Sunak is to extend the Treasury’s UK-wide programme of business support loans as ministers race to cushion the economy from what England’s chief medical officer will on Monday call “a very challenging winter”.

Mr Sunak is this week expected to unveil plans to extend its four loan schemes, which have already backed £53bn in lending to companies through government guarantees, in a sign that new national support measures are needed to avert widespread business collapses and mass job losses.

The move to bolster businesses comes as the government weighs up whether to do more to counter the spread of Covid-19, including new national restrictions in England. Sadiq Khan, London mayor, on Sunday held talks with ministers on possible new restrictions in the capital.

The trend in the UK is heading in the wrong direction. We are at a critical point in the pandemic

A spokesperson for Mr Khan said the situation was “clearly worsening”, and hinted at imminent action: “The mayor wants fast action as we cannot risk a delay.”

Mr Khan is considering urging workers to stay at home, reversing recent government efforts to coax people back into their offices.

The drumbeat for tougher restrictions will intensify on Monday when Chris Whitty, England’s chief medical officer, and Patrick Vallance, chief scientific adviser, give a public briefing on the latest Covid-19 data.

“The trend in the UK is heading in the wrong direction,” Prof Whitty will say. “We are at a critical point in the pandemic. We are looking at the data to see how to manage the spread of the virus ahead of a very challenging winter period.”

Hospitalisations in England are doubling every eight days and the R number — or reproductive rate — for the virus stood at between 1.1 and 1.4 on Friday. Scientists fear Britain is tracking France and Spain, where the virus has spread quickly in recent weeks.

Boris Johnson, the prime minister, says he wants to avoid a national lockdown and has agreed with Mr Sunak that — for now at least — restrictions should focus on curbing social interaction rather than business closures.

But Matt Hancock, health secretary said “we are looking at all the options” and Prof Whitty is pushing for tough new national restrictions — a “circuit breaker” strategy lasting perhaps two weeks — to delay the spread of the virus.

Mr Sunak has promised to be “creative” in finding ways to support jobs through the autumn and is under pressure from Labour and some Tory MPs to extend the furlough scheme — or put in place a replacement — when it ends on October 31.

Three of the programmes were due to end this month for applications. The fourth — the “bounce back” loan scheme — was scheduled to close at the start of November.

According to two people familiar with the talks, the extension is set to include the Future Fund — the innovative support programme that could see the government take stakes in scores of fast-growing start-ups forced to take state-backed convertible loans.

The Treasury has previously resisted calls from business leaders for an extension to the scheme, said one person close to the discussions, with officials said to be keen to wind down costly support packages as soon as possible.

The decision is designed to help companies once again hit by further lockdowns, either at a regional or national level, or forced to close their doors again under new curfews.

Restaurants and bars have already seen more than half of their business wiped out this weekend in areas in the north that have been forced to implement new restrictions, according to UKHospitality, which represents the sector.

The majority of the state-backed loans have been through the “bounce back” scheme — offering loans of up to £50,000 on an interest-free basis — which has been used by more than 1.1m businesses so far borrowing over £35bn.

The extension will revive concerns about the extent of losses that could face the government, with estimates from the Office for Budget Responsibility that up to 40 per cent of “bounce back” borrowers could default as businesses struggle to repay their debts.

Sun Sep 20 , 2020
Boris Johnson’s promise to “level up” prosperity across the UK will fail unless his government puts as much emphasis on improving people’s health and skills as it does infrastructure, a group of distinguished economists have found. The updated Greater Manchester Independent Prosperity Review, launched on Monday, warned that the coronavirus […] 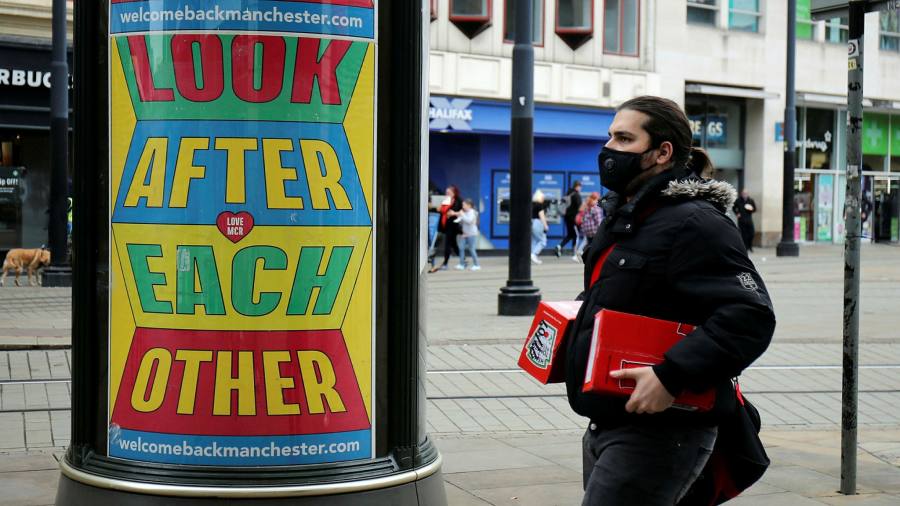