Tesco has defended its decision to pay a larger than expected full-year dividend as analysts warned the impact of coronavirus could lead to a drop in profits this year.

Dave Lewis, chief executive of the supermarket chain, acknowledged the sensitivity about paying dividends at a time when many companies have suspended them. But he said the 6.5p-a-share payout, worth about £635m in total, reflected performance in the year to the end of February.

“In 2019 our turnround was complete and our financial performance last year allowed us to finally pay out for those who have supported us,” Mr Lewis said.

Tesco paid no dividends at all in 2016 and 2017 as it recovered from profit falls and an accounting scandal that predated Mr Lewis’s arrival in 2014.

The total dividend for the year to February 2020 of 9.15p is still considerably less than annual amounts paid before 2014.

Mr Lewis said the needs of savers and pension funds had to be considered. “We’ve thought long and hard about our responsibilities here . . . we are in a strong position to pay out for the benefit of those people and we think it is right to do so. We would not pay a dividend if we felt it would jeopardise our ability to serve Britain’s shoppers.”

The company also said that while Tesco would benefit from the government’s business rates holiday, it was not taking any other form of government support and was continuing to pay VAT.

“In every scenario we have, our [additional] costs far exceed the £585m of rates relief we’ve been given by the government,” Mr Lewis said. “We want to be absolutely clear that every pound we receive will be invested in ensuring Tesco is able to support Britain’s shoppers through this crisis period.”

The dividend will require shareholder approval.

Tesco did not provide a profit forecast for the year to February 2021, but it said the coronavirus outbreak would cause an increase in operating costs of between £650m and £925m, largely because of increased staffing and distribution costs.

In recent weeks, up to 50,000 staff have been either off sick or self-isolating, although the numbers have now started to come down. It has hired about 45,000 mostly temporary staff to help cover.

Tesco said that if customer behaviour returned to normal by August, the additional costs would be “largely offset” by the rates relief and higher sales volumes.

But in all scenarios it has modelled, any sales increase would tail off by the middle of its financial year. It also said lower income and higher provisions for bad debt meant its banking business would probably post a full-year loss.

Analysts at joint house broker Citi said they expected forecasts for operating profit to fall about 15 per cent, with a similar decline expected for earnings. That implies a dividend cut for the current year under the company’s existing payout policy.

Management stressed that the 30 per cent increase in sales in recent weeks had been a mixed blessing, with higher volumes of food and household items offset by a 70 per cent fall in both clothing and fuel sales. Wholesale unit Booker had been affected by the closure of restaurants.

For the year to February 2020, Tesco reported a pre-tax profit of £1.32bn, down 18 per cent from the previous year. Operating profit rose in the UK and Asia, but fell by more than a quarter in eastern Europe.

The group said the disposal of its Asian business would proceed as scheduled, subject to shareholder and regulatory approval, in the second half of the year.

Tesco shares closed down 0.6 per cent on Wednesday.

Tue Apr 14 , 2020
By Andrea Shalal WASHINGTON (Reuters) – The International Monetary Fund on Monday said it would provide immediate debt relief to 25 member countries under its Catastrophe Containment and Relief Trust to allow them to focus more financial resources on fighting the coronavirus pandemic. IMF Managing Director Kristalina Georgieva said the […] 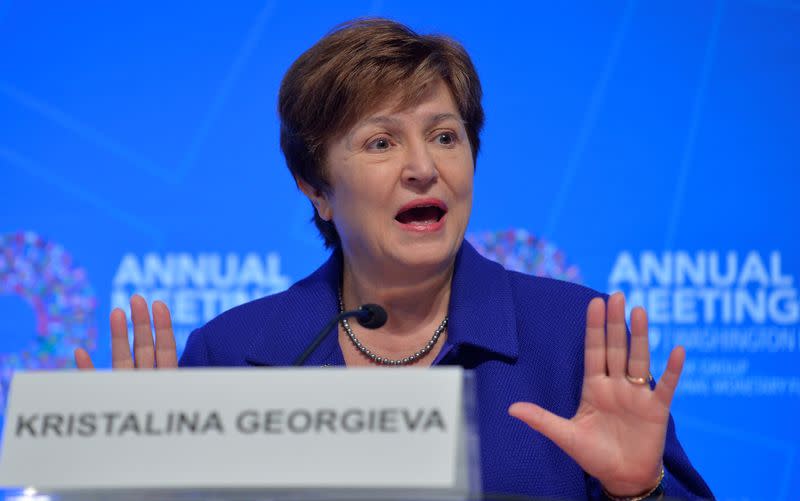