Electrocomponents, the FTSE 250-listed electronics distributor, dubbed it Project Sunrise: the plan to turn the coronavirus crisis into an opportunity “because the sun always rises again”, according to chief executive Lindsley Ruth.

“We are in a really good position to take advantage with a focus on investment and even bolt-on M&A,” said Mr Ruth. “We have even stopped saying the word crisis: we talk about the ‘new normal’.”

After three months of firefighting and balance sheet defence work during the lockdown, the boards of some British companies are turning their thoughts to the future.

Even as many companies are still struggling to survive, and as thousands of jobs are at risk, other businesses are attempting to turn the catastrophic impact of the past few months on the British economy to their advantage.

In recent weeks, companies including Whitbread, Segro, Taylor Wimpey, Unite and Asos have tapped equity markets, partly to protect against further economic disruption but also to ensure they are ready to pounce if opportunities arise.

According to Peel Hunt, more than 136 companies have raised more than £17bn since mid-March — of which more than 90 was directly covid-related — at an average discount of 8 per cent. That is about twice the amount raised in the same period last year, which included the £2.5bn raised by AstraZeneca.

“Companies are increasingly focused on positioning themselves for success beyond the crisis,” said Antonia Rowan, co-head of UK investment banking and corporate broking at Credit Suisse. “They are asking: what are the opportunities here? How can we optimise our business and strategy and emerge stronger in 2022 and beyond?”

Alison Brittain, chief executive of Whitbread, which raised £1bn last month, wants to be ready for the upturn. The UK’s largest hotels group was burning through £80m a month during the lockdown but she said it would be well placed to make acquisitions using the new funds as it planned to fully reopen its chain by the end of the month.

“We clearly did not have a liquidity problem,” she said. “Of course it has a defensive element if there is a second wave but, if not, then we have a war chest to use offensively.”

That might mean mergers and acquisitions, she added. “What will change because of the virus and how will we be a winner? We see a potential recessionary period and in that independent hotels will struggle, which means opportunities for growth and acquisitions.”

Executives moved from crisis management to bargain hunting even as the economic lockdown from the pandemic continued, according to advisers.

“It moved pretty quickly from immediate liquidity needs to front foot raises,” said Mark Dickenson, co-head of corporate broking at HSBC. “First came balance sheet repair but now shareholders are doubling down on who they perceive as the winners.”

Steven Fine, chief executive of broker Peel Hunt, agreed: “Fundraising moved from urgent requirements to opportunistic. It tells me that M&A will come roaring back in the fourth quarter.”

Housebuilder Taylor Wimpey is one example of a company determined not to miss an opportunity — especially as after the last financial crash its weakened balance sheet kept it on the sidelines while rivals profited from the recovery.

“We said then — never again,” chief executive Peter Redfern told the Financial Times after this month’s £500m equity raise, which bolstered the company’s £1.5bn war chest for the acquisition of land that has been marked down during the pandemic.

“We did not need the equity raise for survival — we still had plenty of cash on the balance sheet but we wanted to make sure we had the opportunity to invest significantly. We wanted to be ahead of the game.”

The capital raising was completed despite worries over economic conditions. Taylor Wimpey has withdrawn its financial guidance, mothballed sites and cut dividends and management pay but it is now back to selling homes with a strong order book.

“Its based on a medium term positive outlook,” said Mr Redfern, but admitted: “Six weeks ago it would have been tough but now investors feel they have the rough shape. Short term decisions are the ones you tend to regret; medium term is the right way of thinking.”

Other companies have also identified future opportunities. FTSE 100 distribution group, Bunzl, which sells packaging to supermarkets and supplies hospitals with gloves and gowns, has withdrawn performance guidance for the rest of this year given the uncertainty over a second wave of coronavirus.

But Frank van Zanten, chief executive, said he expected “opportunities to come through in the next few years given we have the balance sheet to manage acquisitions.”

The group this month announced it would hand back government furlough money after a boost to business.

People are not looking at 2020 multiples — it’s looking more like 2022, or even 2023 in some sectors — as they are looking for the long term winners

Meanwhile Essentra, the FTSE 250 manufacturer, will produce a revised business growth plan in the next couple of months to “switch from defence to offence . . . while keeping a beady and careful eye on cash generation”. “We are looking at ways to get on the front foot,” said chief executive Paul Forman.

Matt Hall, head of UK corporate broking at Deutsche Bank, added: “People are not looking at 2020 multiples — it’s looking more like 2022, or even 2023 in some sectors — as they are looking for the long term winners.”

Investors have also been supportive of the move to the front foot among companies that had just weeks before been approaching them for emergency funds to simply survive.

“I have more recently been participating in raises for companies looking to use the pandemic to grow their business,” said Trevor Green, head of UK institutional funds at Aviva Investors.

“The key for me is management’s track record on previous M&A and looking for companies doing something complimentary to their existing strategy.” It was also a chance to invest more in companies that had been expensive in the past but whose share prices had fallen, added Mr Green.

According to JPMorgan, share prices have risen in almost 90 per cent of equity raisings during the crisis, which means that most investors have profited.

Peter Luck, co-head of UK investment banking and head of corporate broking at Bank of America, said the past few months had been “a good advert for the public markets”, given the ease with which companies had been able to raise money at speed.

With the stronger groups now feeling more secure, advisers said the next wave of equity issuance would likely come from companies still struggling to survive the economic fallout of the pandemic.

Alex Ham, co-ceo of Numis, said there could be up to £100bn of extra equity issuance needed judging by the last financial crash, pointing out that companies in distressed sectors such as aviation still needed to raise money and pay back government debt.

Mr Luck did not expect equity raisings to dry up soon. “There is a lot of stored up debt pressure in the system that will need to be resolved through re-equitisation,” he said.

Mon Jul 6 , 2020
With new coronavirus infections falling fast, Scotland now seems to have a real chance to effectively eliminate Covid-19 transmission among the general public. But some experts warn that one big obstacle stands in its way: England. Despite much higher levels of infection and hospitalisation, the UK government has since May […] 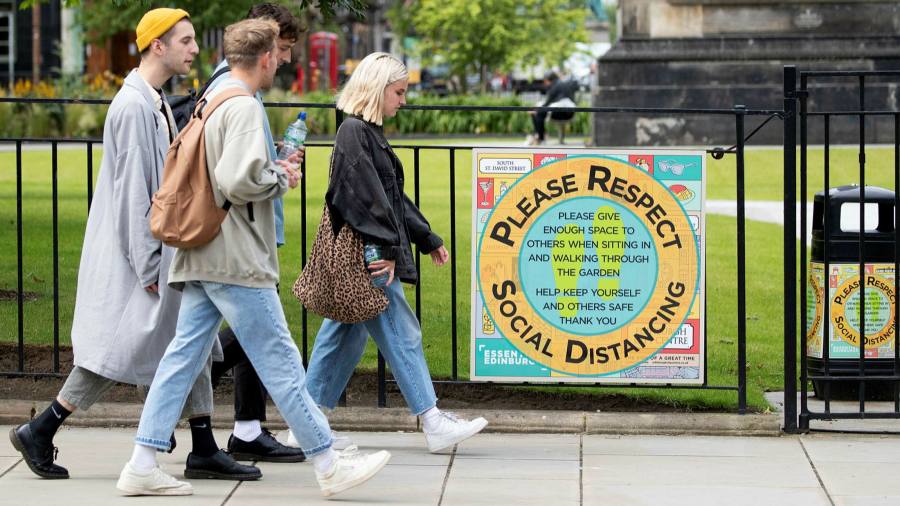