Holidaying in Cornwall is the nearest sensation to being abroad within the UK. The south-western tip of England is one of the most rugged, rustic and mysterious parts of the land to visit. Tourism is by far its biggest sector: each year, 4.5m people trek down here to inject £1.5bn […]

Holidaying in Cornwall is the nearest sensation to being abroad within the UK. The south-western tip of England is one of the most rugged, rustic and mysterious parts of the land to visit. Tourism is by far its biggest sector: each year, 4.5m people trek down here to inject £1.5bn into the economy.

But Covid-19 has been devastating for the region. A big chunk of the summer season has been wiped out by the nationwide lockdown imposed in March. Without tourists, the small towns and villages risk shrivelling up. As the head of the local chamber of commerce remarks, the pandemic will probably have “a really bad long-term impact” for Cornwall.

In the fishing village of Polperro, a popular tourist spot, visitors are gradually returning. As lockdown eases, many of the pubs and eateries are trading again. But not all. One of the town’s prominent shop owners, who declined to be named, says: “Some here just can’t afford [to open with the new rules]. Plus, we all know there is probably another lockdown coming later this year so what’s the point of reopening to close again?”

Compared with London, where many venues have been enthusiastically filled throughout July, places like Polperro are lacking their summer hubbub. Tourists and residents alike are cautious, which points to one of the government’s biggest worries: the British economy has restarted, but people are choosing not to engage with it. As one Treasury official warns: “If people don’t spend, everything about the economy will get a lot worse.”

This is “fogo”, or the “fear of going out”. Since the pandemic began, Britons have been conditioned to stay at home to save lives. During Downing Street press conferences, slides showed death statistics and transport usage, and even a tiny uptick in road traffic brought a sharp rebuke from the medical boffins. Now people are reluctant to get back to normal.

Fogo will eventually dissipate, but tourism cannot wait. VisitBritain, the UK’s tourist board, forecasts a 59 per cent drop in visitors to the UK — a loss of 25m visitors and £20bn in spending. Its picture for tourism at home is not much brighter: it expects a 48 per cent drop in spending by those travelling around England.

Patricia Yates, director of strategy, says Covid-19 has been a “huge and surprising challenge” compared with past shocks. “Usually it is the demand side that falls off, but the lockdown has cut off the supply. We really need to stimulate the domestic market to cope with the lack of international visitors, but we’ve found a real nervousness.” She says the expected release of pent-up demand is being offset by customer fears.

Ms Yates reports “slow progress”, despite a £6m VisitBritain advertising campaign. “We’ve lost four of the key months which are crucial for the industry to build up money to make it through the year. Tourism usually puts on its fat during the summer and loses it during the winter.”

If the industry does not bounce back in the next couple of months, the impact on Cornwall and beyond will be devastating. It seems baffling that the government hasn’t launched a holiday-at-home campaign. While the pandemic makes international travel tiresome and risky — as witnessed by the UK’s decision to put Spain back on its quarantine list — why are people not being encouraged to aid their local economies?

In May, when holidays were still a mirage, culture secretary Oliver Dowden declared: “when we can have British tourism back, perhaps apart from the prime minister you won’t get a bigger champion of the great British break than me”. Yet Boris Johnson has said little about holidaying at home — nor are all the government’s members following Mr Dowden’s words with action. Last weekend, at least two ministers hopped on early bargain flights out of the UK.

In a recent VisitBritain survey, 33 per cent of Britons said they would take an overnight trip in August. That is not enough to save the hotels, pubs and restaurants of Cornwall.

Whether the tourist industry can recover is a critical test for the whole economy. If Britons opt not to venture out this summer, when the virus is at bay, it bodes badly for later in the year when conditions may be more fraught. In Polperro, the small shops owners remain worried. As one puts it, “let’s hope more come.”

Wed Jul 29 , 2020
UK households and businesses continued to hoard cash in June, but the pace of increase slowed, according to Bank of England data that shows consumer borrowing rising again while businesses are taking on smaller amounts of debt. Cash holdings by companies and households rose by £16bn, down from a monthly […] 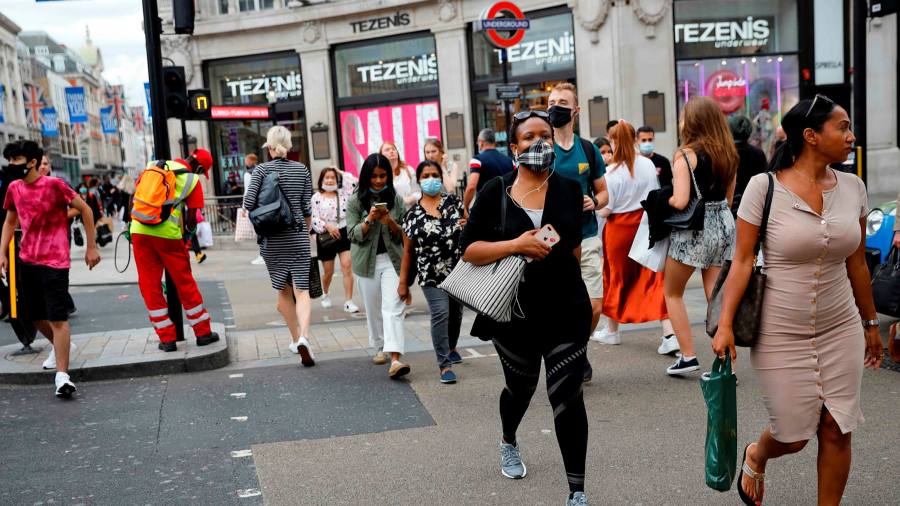