The Treasury is in talks with business groups to allow companies to claim support from its “furlough” scheme for staff returning to work part-time under plans for a gradual reopening of the economy in the coming months.

Under the £40bn “job retention scheme” the government covers 80 per cent of the wages of workers who are staying at home and not working at all, up to a cap of £2,500 a month.

Manufacturers, in particular, would struggle to return factories to full capacity immediately and would need the “flexibility” to slowly ramp up production with workers doing rotating shifts, according to Make UK, the trade body.

Many companies want their workers to be able to return to work in reduced shift patterns to maintain skills levels in the workplace.

“You can’t just flick the switch and everything is back to normal. That might not happen this year or even into 2021,” said Richard Warren, head of policy at UK Steel. “Companies want the same system as Germany where instead of 30 per cent of staff not working, all staff work 30 per cent lower hours.”

Rishi Sunak, chancellor of the exchequer, told MPs on Monday that he was planning a “gradual” winding down of the government’s job support scheme, which supports 4m jobs, to avert a surge in unemployment after it is due to end on June 30. Proposals include slowly reducing the support level or removing it from sectors one after another.

But the Treasury has also held talks with business groups, including the CBI, about redesigning the furlough scheme to bring in greater flexibility. The aim is to allow at least some employees to return to work part-time initially, according to one person involved in the discussions.

“Clearly, small businesses with furloughed staff are not suddenly going to go from zero to a hundred overnight. If recovery happens in stages then the support provided by the job retention scheme needs to reflect that reality,” said Mike Cherry, chairman of the Federation of Small Businesses.

“Business owners should be able to bring full-time staff back to work for a few days a week — whilst still using the furlough system for days when staff are not required — as they gradually resume business as usual,” he said.

Officials are cautious about the potential for fraud if companies are allowed to make claims for staff working a fraction of their usual hours, with one asking: “How would anyone police whether a certain worker is doing 60 per cent or 40 per cent of his usual hours?”

But a potential solution under consideration by the Treasury is to cut the time that an employee must be furloughed to qualify for the job retention scheme from three weeks to one. This would allow factories to employ workers on a one-week-on, one-week-off basis.

“This change could encourage more factories to reopen and would save taxpayers in the long run,” said one person close to the talks. “You would get around the issue of potential fraud, and the government wouldn’t have to unpick its existing IT system.”

Make UK will on Friday publish a survey suggesting that four-fifths of its members have seen a decrease in orders during the pandemic. The survey also found that taking staff off furlough is likely to be a prolonged process, with almost a third of companies saying they would wait to see orders increase again.

According to a survey of more than 1,000 employers commissioned by the CIPD, the professional body for HR, the majority of those using the scheme want more flexibility to enable furloughed staff to work reduced hours. The CIPD warned that without these changes, the scheme could become “a waiting room for unemployment” and would fail in its aim to protect the “significant numbers of the jobs it set out to save”.

Countries such as France and Germany have allowed furloughed staff to work part-time as businesses reopen.

Fri May 1 , 2020
Last Friday, when anxious workers swamped the UK government’s new national coronavirus testing appointment system, a short, orderly queue formed outside a sports stadium in Salford. It was a routine day for the testing centre at the AJ Bell stadium set up in mid-April by the city council and Salford […] 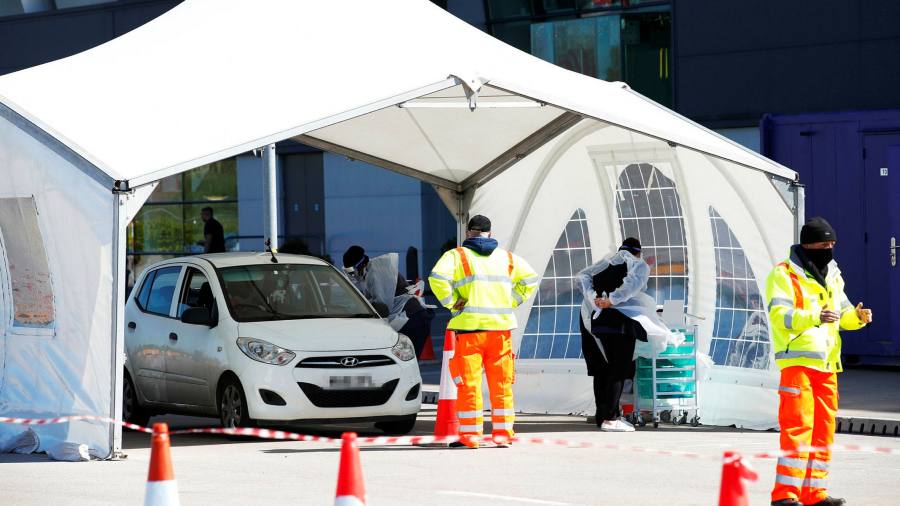