U.S. dollar banknotes. Liu Jie | Xinhua via Getty The dollar was marginally higher in narrow ranges against most currencies on Tuesday as renewed concerns about diplomatic tension between the United States and China and rising coronavirus cases put a dent in risk appetite. The euro held onto gains against […]

The dollar was marginally higher in narrow ranges against most currencies on Tuesday as renewed concerns about diplomatic tension between the United States and China and rising coronavirus cases put a dent in risk appetite.

The euro held onto gains against the greenback and the pound as investors await data on German investor sentiment to help gauge the pace of Europe’s recovery from the health crisis.

Currency trading has thinned out as a resurgence of novel coronavirus infections has caused some areas to place new restrictions on business activity.

Markets now face an additional threat from tit-for-tat retaliation between Washington and Beijing over access to U.S. financial markets, civil liberties in Hong Kong and territorial claims in the South China Sea.

“The focus has shifted to whether or not the next round of coronavirus lockdowns will be large enough to damage economic growth,” said Junichi Ishikawa, senior foreign exchange strategist at IG Securities.

“The Hong Kong problem could potentially lead to new trade friction. Negative developments on either front could cause stocks to adjust lower, and drive some safe-haven flows to the dollar and the yen.”

The dollar stood at 107.18 yen on Tuesday in Asia following a 0.4% gain in the previous session.

The dollar traded at 0.9422 Swiss franc after eking out three consecutive sessions of narrow gains.

The euro was quoted at $1.1344, resting below a one-month high reached on Monday. The common currency traded at 90.40 pence, holding onto a 0.9% gain from the previous session.

The United States and China are waging diplomatic battles on several fronts that have the potential to unsettle financial markets.

This could foreshadow a broader crackdown on Chinese firms listed on U.S. stock markets that are under fire for sidestepping U.S. disclosure rules.

In addition, the United States has hardened its stance against China’s claims in the South China Sea and is taking steps to end Hong Kong’s special legal status in protest against Beijing’s security law for the former British colony.

The onshore yuan fell 0.2% to 7.0109 per dollar as worries about the Sino-U.S. relationship slowed the Chinese currency’s recent rally.

Data due later this week on Chinese gross domestic product (GDP), retail sales and industrial output, which are expected to show the world’s second-largest economy staged a V-shaped recovery in the second quarter.

The Singapore dollar and other Asian currencies fell after data showed Singapore’s GDP collapsed by a record 41.2% in the second quarter, highlighting the carnage that the pandemic can inflict on small, trade-reliant economies.

Demand for riskier assets is likely to take a hit after California, the most populous U.S. state, placed new restrictions on businesses as coronavirus cases and hospitalizations soared.

The Australian dollar was little changed at $0.6936. Sentiment for the Aussie has taken a hit as some Australian states have also re-imposed coronavirus restrictions.

The Antipodean currencies are considered barometers of risk because of their close ties to commodities and China’s economy.

UK-China relations: from ‘golden era’ to the deep freeze

Tue Jul 14 , 2020
In the autumn of 2015, on a mission to Beijing that would pave the way for President Xi Jinping’s triumphal state visit to the UK that October, George Osborne employed a phrase that has come to haunt Sino-British relations. Looking to the future, the then chancellor hailed what he predicted […] 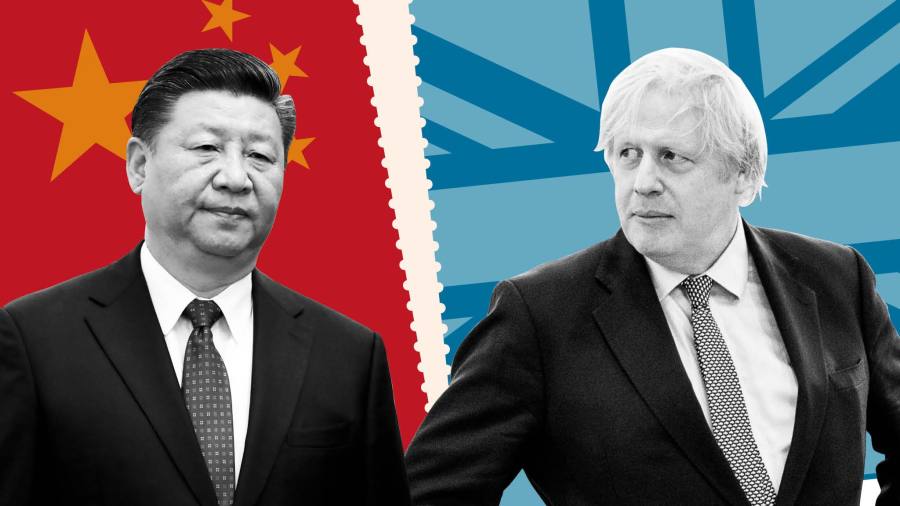