WASHINGTON (Reuters) – The shuttering of the U.S. economy due to the coronavirus pandemic is a shock of historic proportions that likely will push the national unemployment rate to 16% or higher this month and require more stimulus to ensure a strong rebound, a White House economic adviser said on Sunday.

“This is the biggest negative shock that our economy, I think, has ever seen. We’re going to be looking at an unemployment rate that approaches rates that we saw during the Great Depression” of the 1930s, Hassett added.

Lockdowns around the United States to curtail the spread of the novel coronavirus have hammered the economy, shuttering businesses and sending unemployment skyrocketing.

A record 26.5 million Americans have filed for jobless benefits since mid-March, and retail sales, homebuilding and consumer confidence have all cratered.

The nonpartisan Congressional Budget Office predicts U.S. GDP will contract at nearly a 40% annual rate in the second quarter, with unemployment cresting at 16% in the third quarter. But even next year, the CBO sees the jobless rate still averaging above 10 percent.

“I think the unemployment rate is going to jump to a level probably around 16 percent or even higher in the next jobs report” due on May 8 providing April employment statistics, Hassett told reporters at the White House.

Hassett added that the change in the nation’s GDP in the second quarter would be a negative “big number.”

“I think the next couple of months are going to look terrible. You’re going to see numbers as bad as anything we’ve ever seen before,” Hassett said, referring to U.S. economic data.

“We’re going to need really big thoughtful policies to put together to make it so that people are optimistic again,” Hassett added.

Trump’s advisers want to hone a list of five or six ideas to present to Congress to help clear the economic carnage, Hassett said.

“I’m sure that over the next three or four weeks, everybody’s going to pull together and come up with a plan to give us the best chance possible for a V-shaped recovery,” Hassett told ABC. “I … don’t think you get it if we don’t have another round of really solid legislation.”

A “V-shaped recovery” in one in which an economy bounces back sharply after a precipitous decline.

The U.S. Congress has already approved $3 trillion (£2.4 trillion) in coronavirus relief in a show of bipartisan support for laid off workers and an economy in freefall.

Now, lawmakers are poised for a battle over federal assistance to state and local governments whose budgets have been shattered by a plunge in tax revenue even as they have had to take extraordinary measures during a pandemic that has caused a U.S. death toll approaching 55,000.

New York City needs $7.4 billion in federal aid to offset economic losses from the coronavirus, its mayor said on Sunday.

“If New York City is not (made) whole, it will drag down the entire region, and it will hold up the entire national economic restart,” Mayor Bill de Blasio, a Democrat, said on the Fox program “Sunday Morning Futures.”

Like de Blasio, many of the nation’s governors – Democrats and Republicans alike – have pressed the Trump administration and Congress to come forward with a sizable relief package.

“We will have state and local (aid), and we will have it in a very significant way,” House of Representatives Speaker Nancy Pelosi, the top Democrat in Congress, said on CNN’s “State of the Union.”

“The governors are impatient,” Pelosi added. “Their impatience will help us get an even bigger number.”

Trump has shown a willingness to support aid for cities and states, but some fellow Republicans – including Senate Majority Leader Mitch McConnell – have voiced wariness, citing a mounting federal debt load.

A man stands in front of a Modell’s store that is closed, as retail sales suffer record drop during the outbreak of the coronavirus disease (COVID-19) in New York City, New York, U.S., April 15, 2020. REUTERS/Bryan R Smith

McConnell, in remarks that have drawn sharp rebukes from various governors as well as Democratic lawmakers, has suggested that states should declare bankruptcy instead.

Asked whether Trump would support providing hundreds of billions of dollars to the states, Mnuchin said any further relief would have to receive support from both parties.

“This is a war. We’ll win this war. If we need to spend more money we will, and we’ll only do it with bipartisan support,” Mnuchin told “Fox News Sunday.”

Sun Apr 26 , 2020
BERLIN (Reuters) – Germany changed course on Sunday over which type of smartphone technology it wanted to use to trace coronavirus infections, backing an approach supported by Apple and Google along with a growing number of other European countries. A sign with distancing rules and the notice that masks must […] 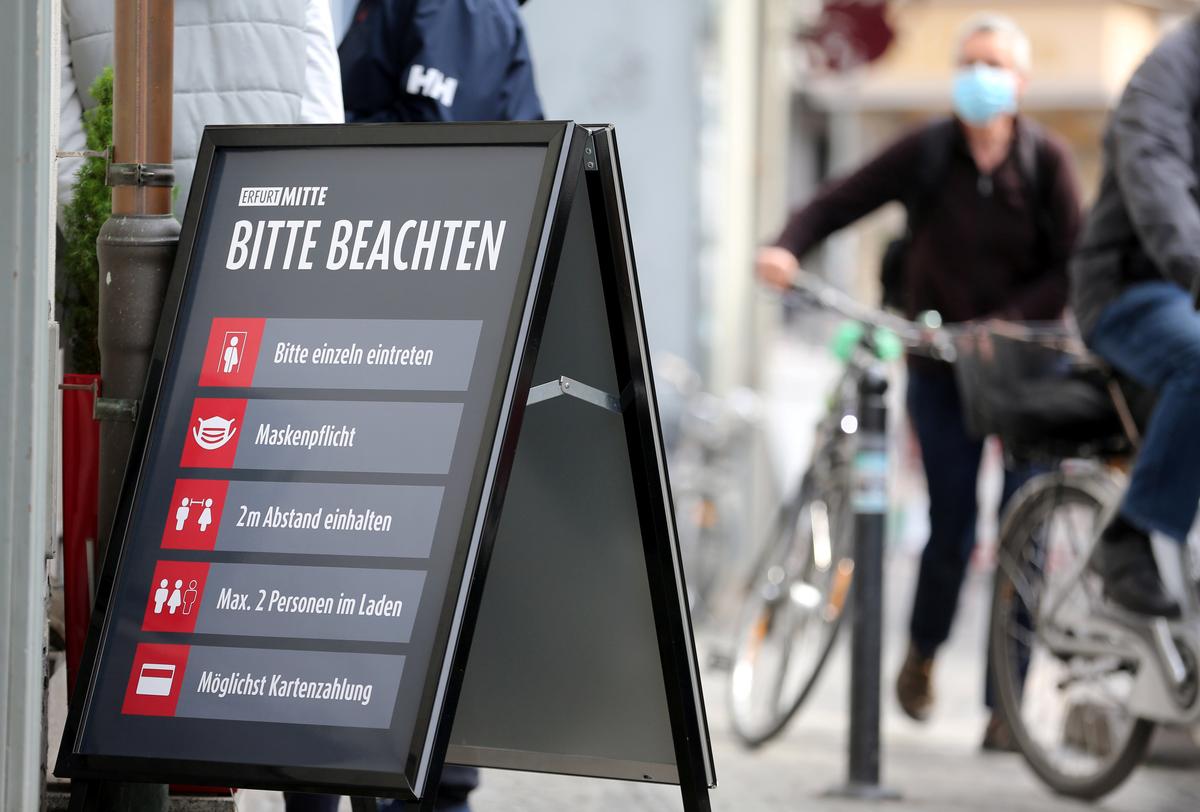