HONG KONG (Reuters) – A survey of U.S. businesses on Wednesday revealed deep fears for the future of their operations in Hong Kong if China imposes national security legislation that critics say could curb the financial centre’s freedoms and fuel ongoing protests.

Contributing to simmering anti-government tensions, Hong Kong lawmakers are set to resume a debate over a controversial bill that would criminalise disrespect of China’s national anthem, following scuffles in the legislature in recent weeks.

An annual vigil to mark the June 4, 1989, anniversary of Chinese troops opening fire on pro-democracy students in and around Tiananmen Square has been cancelled for the first time ever due to the coronavirus but activists still plan to rally.

Following that, demonstrations are planned to mark the anniversary of the million-people march on June 9 last year against a since-withdrawn mainland China extradition bill, and the protests three days later that were met by police with tear gas and rubber bullets in scenes which radicalised moderates.

The two key events turned last year’s protests into a broader movement for greater democracy, plunging the Chinese-ruled city into its biggest crisis since its handover from former colonial master Britain in 1997.

Frustrated with the often-violent demonstrations, authorities in Beijing last month advanced plans to introduce national security laws in the city, sending shivers through the legal, diplomatic and business communities.

The survey conducted for the American Chamber of Commerce (Amcham) showed 30% of respondents were “moderately” concerned and 53.3% were “very concerned” about the laws, which aim to tackle secession, subversion, terrorism and foreign interference in Hong Kong.

About 60% thought the legislation would harm their business operations, citing concerns about ambiguity in scope and enforcement, erosion of autonomy, talent drain, Hong Kong’s international status, social unrest and the independence of the justice system among others.

The survey conducted on June 1-2 received responses from 180 or 15% of Amcham’s members.

Beijing and Hong Kong authorities have repeatedly said the national security laws would not affect the city’s high degree of autonomy – part of the handover terms from former colonial power Britain to China in 1997 – including its common law, independent legal system.

Some companies, including HSBC Holdings (HSBA.L), have come under pressure to support the national security law, with former Hong Kong leader Leung Chun-ying calling out the global bank for not making its “stance” clear on the legislation.

“It can ensure that Hong Kong continues to absorb investment, increase job opportunities and guarantee people’s livelihood,” Jardines said in the statement.

Even before China announced its plan for the security law, there was a surge in renewals of British National Overseas Passports by Hong Kong residents, while immigration consultants have reported a rush of inquiries from people looking to move overseas.

Hong Kong leader Carrie Lam accused foreign governments on Tuesday of “double standards” in their reaction to Beijing’s plans. Lam was in Beijing on Wednesday to discuss the legislation, which is yet to be drafted, but is expected to be implemented by September.

Euro zone deep downturn eased in May, growth some way off: PMI

Wed Jun 3 , 2020
LONDON (Reuters) – Euro zone businesses suffered another devastating contraction in activity in May and while there are signs the worst is over, it could be months before there is a return to growth, a survey showed on Wednesday. FILE PHOTO – Workers hold a minute of silence for the […] 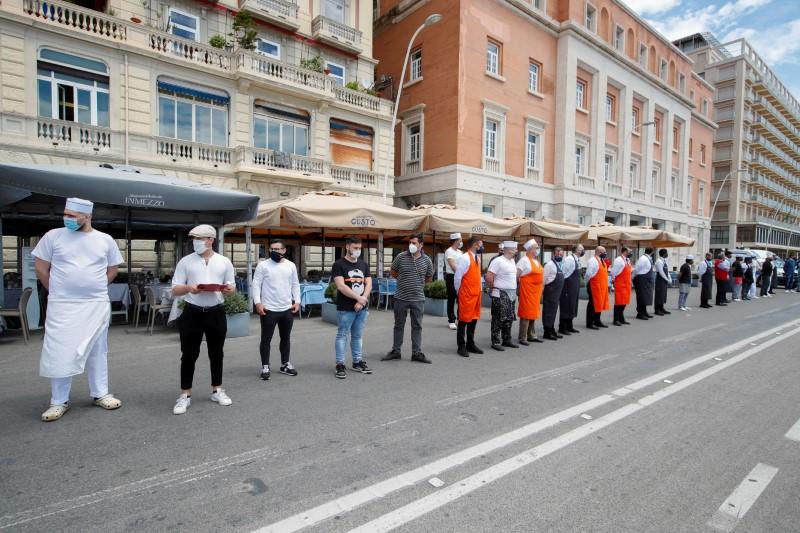