Britain and Japan on Friday reached “substantial agreement” on most elements of a post-Brexit trade deal, after two days of talks during which UK trade secretary Liz Truss resisted moves to restrict British farm exports.

The proposed deal, which both sides want to wrap up by the end of the month, largely mirrors the EU-Japan trade agreement of 2019.

Unless London and Tokyo finalise a successor regime, trade will be seriously disrupted when the UK’s Brexit transition period ends on December 31.

Ms Truss insisted the planned UK-Japan deal would open up extra trade in financial services, digital and ecommerce through improved regulatory co-operation. She said that in these areas the deal would go “significantly beyond the EU-Japan agreement”.

However the UK government forecasts the deal would only boost Britain’s gross domestic product by 0.07 per cent in the long-term, with a £15bn increase in trade. By contrast, the government forecasts a 5 per cent loss of GDP growth when Britain leaves the EU single market and customs union.

In most areas, we have reached a substantial agreement.

The UK trade department has also estimated the deal with Tokyo could lead to a 21 per cent rise in British exports of goods and services to Japan. But UK imports from Japan are estimated to increase by 79 per cent.

Japan has insisted throughout that its new deal with the UK, with a population of 66m, could not be as good as the one it agreed with the EU, whose 27 remaining member states have a combined population of almost 450m.

During the talks between Ms Truss and Japan’s foreign minister Toshimitsu Motegi in London, the biggest dispute focused on Tokyo’s attempt to reduce access for British farmers to Japanese markets.

One ally of Ms Truss said: “Liz stood firm on UK interests and it was clear that we wouldn’t accept a rollback on the EU-Japan deal.” Ms Truss is hoping to maintain EU levels of access to Japanese markets for British food producers.

In spite of Ms Truss’s enthusiasm for opening up Japanese “pork markets” — a speech by her on the subject has been widely shared on social media — this dispute focused on non-livestock exports. Tokyo also pushed hard to cut UK tariffs on Japanese car parts.

“In most areas, we have reached a substantial agreement,” Mr Motegi told reporters after the talks in London. Ms Truss said: “Negotiations have been positive and productive and we have reached consensus on the major elements of a deal.”

Talks on a deal began only two months ago. The breakneck speed of the negotiations reflects the urgency on both sides to get an agreement before Brexit finally takes full effect on December 31.

Both sides hope a deal will provide the impetus for Britain to join the trans-Pacific free trade agreement grouping of 11 countries, including Japan, Australia and Mexico.

Ms Truss’s allies said membership of the Pacific grouping would “put us in a stronger position to shape new global rules and open up new opportunities for British business”.

Meanwhile Cabinet Office minister Michael Gove said he was now more confident that Britain could secure a Canada-style trade deal with the EU in the coming weeks, removing tariffs and quotas.

“I’m confident that there will be a deal, I think there has been a welcome change in tone over the last few weeks,” Mr Gove told reporters on a visit to Northern Ireland. “The omens are good for a deal.”

Both sides are looking to conclude a deal in time for an EU summit in mid-October.

However a deal will not remove the need for a new system of trade bureaucracy when Britain leaves the single market and customs union.

Preston put into local lockdown after jump in cases

Fri Aug 7 , 2020
The UK government on Friday increased the scope of local lockdowns in England by adding the city of Preston to areas where different households cannot meet indoors, to try to curb the spread of coronavirus. Ministers also decided to maintain restrictions introduced last week in a large part of northern […] 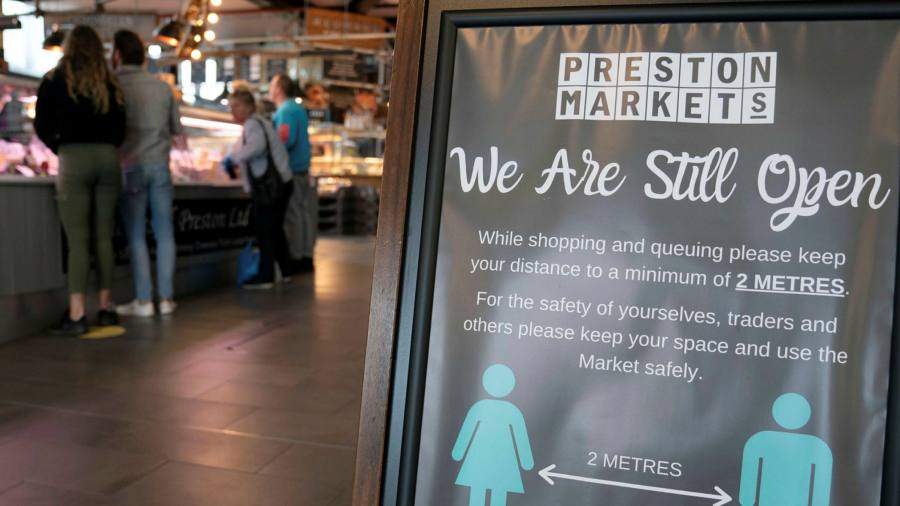