The reopening of pubs and restaurants in England and Northern Ireland has boosted the UK economy, but unofficial data show spending remains depressed — and helps explain why chancellor Rishi Sunak threw a lifeline to the sector in his summer statement on Wednesday. Official estimates of economic output for July […]

The reopening of pubs and restaurants in England and Northern Ireland has boosted the UK economy, but unofficial data show spending remains depressed — and helps explain why chancellor Rishi Sunak threw a lifeline to the sector in his summer statement on Wednesday.

Official estimates of economic output for July will not be available until September, but high-frequency data — such as bank transactions and mobility data — show ‘Super Saturday’, the July 4 reopening of the hospitality sector, did not see a return to business as usual for bars and restaurants. Instead it points to sales and customers numbers at only about half pre-virus levels.

All high-frequency figures are experimental, with uncertain links to official data, but they give an up-to-date indication of consumer behaviour and have been used by policymakers to inform their support of the economy during the pandemic.

The hospitality sector employs 1.8m people across the UK, most of whom have been furloughed during the lockdown and could lose their jobs if sales do not recover fast enough.

In his statement, Mr Sunak announced support for the sector, including a temporary value added tax cut from 20 per cent to 5 per cent and a voucher scheme offering subsidised discounts for restaurants.

The measures “should help to rebuild confidence after initial observations from the pubs and restaurant reopening suggest a fair degree of consumer caution”, said Fabrice Montagné, economist at Barclays. He added that along with the chancellor’s other measures, and with better incoming data, a “more optimistic” UK growth forecast for the year “is now a possibility”.

However, despite a “boost” last weekend, “consumers continue to spend considerably less in restaurants bars, pubs and cafés than last year”, according to Avinash Srinivasan, analyst at Fable Data, a company that aggregates transaction data from banks, credit card providers and fintech companies.

While sales in non-food stores have increased since non-essential shops reopened in England in mid-June, the value of overall card and bank transactions was about 23 per cent down on last year’s levels in the week ending July 5, according to the company.

Credit and debit card data from Barclaycard and Lloyds Bank show similar patterns. Although the value of transactions across the UK hospitality, leisure and entertainment sectors was up 7 per cent over the weekend of July 4 compared to a week earlier, it was 45 per cent lower than the same weekend last year, according to Barclaycard Payments, which claims to represent nearly 40 per cent of all card transactions.

Lloyds Bank debit card data also showed that across the UK, spending at pubs was 65 per cent less than on an average weekend in February, the month before the lockdown began.

The early evidence of subdued sales makes the prospect of a spike in unemployment in the hospitality sector a real possibility. Helen Miller, Deputy Director at the Institute for Fiscal Studies, said the VAT cut in the summer statement “will increase output in these sectors” but “social distancing will remain a constraint in many cases”.

But even last weekend the hospitality sector received only about half the number of customers it did before the pandemic, with the levels more depressed in some of the UK’s biggest cities. The data reflect that many services are still closed, with England’s theatres, music venues and pools only allowed to reopen from Saturday.

The reopening of restaurants and bars also helped bolster retailers, but although footfall was higher than a week earlier, it remained at half the level of the same time last year, according to the retail consultancy Springboard.

Its data showed that large city centres were hardest hit, with retail footfall in central London and the West End on July 4 down 75 per cent from last year.

While a full economic recovery depends on a revival of consumer spending, the data suggest that “people saving more during lockdown plan to continue saving more than others as restrictions ease”, said Robert Wood, economist at Bank of America.

He warned that despite the government’s measures, he expects output to be about 5 per cent below pre-virus levels at the end of the year “due to further job cuts, high levels of household saving and the continued imposition of measures to keep the virus at bay”.

Fri Jul 10 , 2020
Turkey is “very close” to signing a free trade agreement with the UK covering manufactured goods, agriculture and services, Turkey’s foreign minister has said. Mevlut Cavusoglu told the Financial Times that in principle there were no differences over the deal, but added that some technical issues needed to be finalised. […] 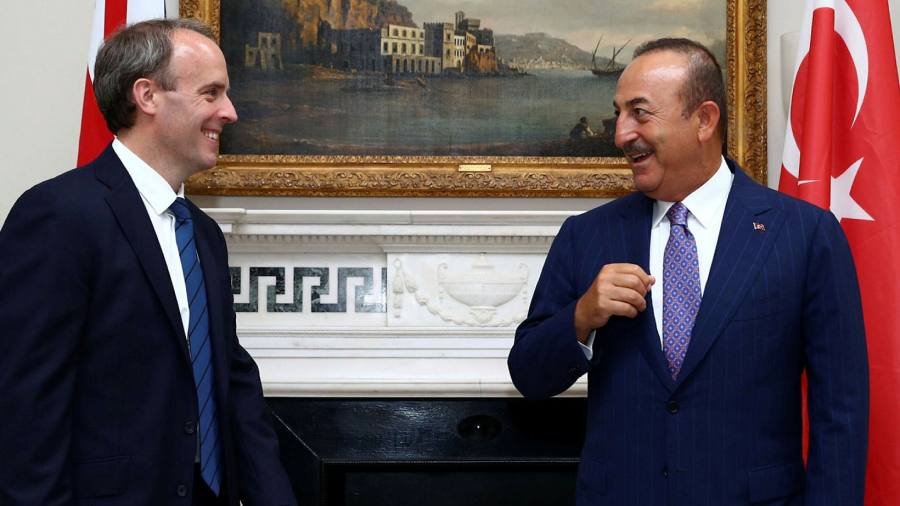