The tale this week for UK investors will feel wearily familiar. Again Covid-19 cases are rising. Again the risk of a nationwide lockdown is looming. Again the economy looks like it might be dealt another body blow.

The question for investors now is whether recent history continues to repeat. As the pandemic started to spread early in the year, the market saw a 35 per cent drop from its peak in mid-January before joining a global rally driven by the huge intervention by central banks.

For now, investors still seem to be taking a rather gloomy view of UK company prospects with the FTSE 100 falling nearly 3 per cent over the week. Even before this fall, the FTSE 100’s year-to-date loss of 20 per cent meant it was lagging its US and European counterparts by over 10 percentage points.

Profit forecasts might be akin to “finger in the air” estimates given the macro uncertainties but Nobel Prize winning economist Robert Schiller’s longer-term measure of comparing today’s prices to the average earnings of the past decade now shows the UK market to be trading on a ratio of just 12.6 times, down from 15.8 times at the end of 2019.

The initial reaction this week may be more muted than the sell-off in March but it still indicated a downbeat assessment of the prospects for a market heavily exposed to cyclical industries such as finance, commodities and travel.

Chancellor Rishi Sunak’s fresh $5bn for the economy might provide some support but the pain is still coming. As Deutsche Bank’s Sanjay Raja pointed out in a note on Thursday: “We don’t think the chancellor’s plan will be enough to fully avert a jobs crisis in the near term.”

Financials, as the second largest sector in the market, will be of particular concern if that is the case. Although Bank of England governor Andrew Bailey played down the likelihood of negative interest rates this week, the prospect of a dwindling number of borrowers will be of little comfort to investors who have watched banks struggle to eke out a profit after a decade of near-zero rates. The outlook for even mid-single digit returns on equity continues to look dim.

Sell-offs, of course, also bring opportunities for those seeing through the gloom over a longer term. Morgan Stanley believes there might be some in travel, a sector hit by dashed hopes of swift return to holidaying. Already out-of-favour plays such as easyJet, Tui and Wizz Air were all down over 15 per cent this week. Morgan Stanley did plump for Ryanair this week as one cyclical pick.

The reasons will be familiar to followers of Michael O’Leary’s fee extracting airline: lowest unit costs, a lack of competition on some routes and ample liquidity from a recent bout of capital raises should mean Ryanair is well placed to capitalise when we do take to the skies again. Little is mentioned, however, of the potential for lingering caution over air travel after a stressful summer of quarantines. News on Thursday of the company offering a buy one get one free offer does not bode well for its margins either.

Just as airlines have fared poorly on news of further lockdown measures, so the stay-at-home stocks, such as Ocado, Just Eat Takeaway and stock gambling stock Plus 500, have excelled. Grocery delivery specialist Ocado has done particularly well, with its stock up 10 per cent following news of a bumper third quarter last week, taking its year-to-date return to 124 per cent.

One less obvious stay-at-home play is gin enabler Fevertree which, despite falling a touch this week, is up 11 per cent year to date. It seems like an aeon ago that the company swept into town after Schweppes ignored premium gin’s rise among the melancholic middle classes. In the UK, Fevertree’s years of revenues doubling are now firmly in the past, according to Morgan Stanley. The great expectations for a further run in sales of mother’s ruin, however, lie across the pond. But it is facing fierce competition there and for a company trading at 46 times 2021’s earnings, there is likely some pain ahead if there is even a suggestion its US business is losing its fizz.

More broadly, investors might need a stiff drink. The market might rally as investors look through the gloom to a world after a Covid-19 vaccine but a winter of rising unemployment and restrictions to tackle the virus will test longer-term resolve to stay the course. And that is before one big uncertainty — the countdown to Brexit. If there is no deal on this, all bets are off.

‘Every week is an ordeal’: Johnson under pressure over Brexit and lockdown

Sat Sep 26 , 2020
Boris Johnson may have found the ultimate act of political revenge.Having been stabbed in the back by Michael Gove in his first tilt atbeing Conservative party leader, Britain’s prime minister has now handed the cabinet office minister the task of delivering Brexit in the middle of a pandemic and the […] 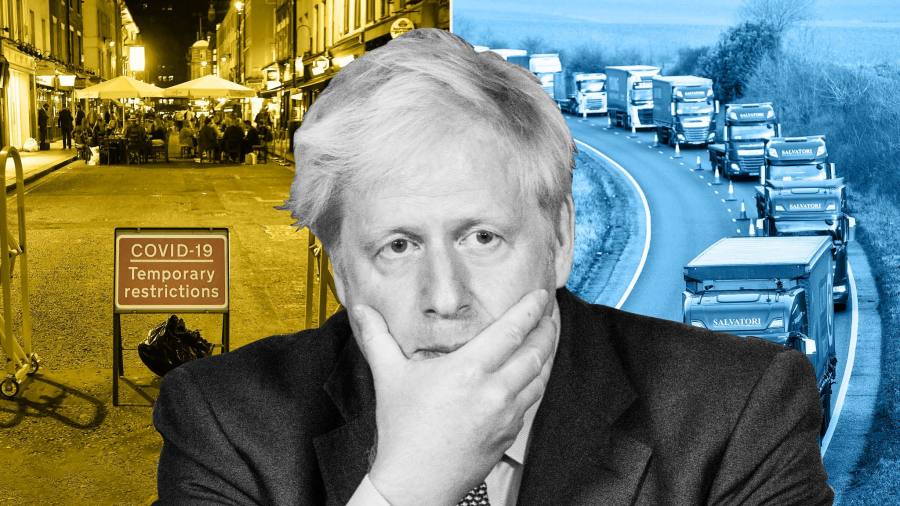