The UK’s £225bn professional services industry is in danger of losing valuable EU business after Brexit, even if the government strikes a “Canada-style” trade deal, a parliamentary committee has warned.

In a report published on Tuesday, the House of Lords’ EU services subcommittee said Britain’s professional firms — including accountants, lawyers and recruiters — had been ignored in negotiations with Brussels over future trade terms. It concluded that contracts and jobs would remain at risk unless a bespoke agreement for exporting UK services could be reached.

Committee chair Baroness Donaghy, said: “More than four and a half million jobs depend on this sector and it contributes almost £225bn to our economy. This sector, and the people who depend on it for their livelihoods, will suffer if its needs are not reflected in the UK’s negotiations with the EU. We are concerned that they have been overlooked.”

In recent months, UK prime minister Boris Johnson has indicated that he preferred an EU trade deal similar to Canada’s — which avoids tariffs and quotas — when Brexit transition period ends on December 31. However, the committee stressed that this would not be enough to prevent damaging restrictions on exports of professional services to Europe.

Under the EU-Canada Comprehensive Economic and Trade Agreement (Ceta), European countries can still use “national reservations” to protect their services firms from competition — and this could apply in a UK deal.

These carve-outs can include demands that foreign professionals become resident in a certain country, adopt domestic corporate structures or demonstrate that a talent is not available locally. That would potentially make it much more difficult for UK lawyers, real estate agents and university study programmes to operate in the EU.

“Without a UK-EU agreement, UK lawyers may become unable to operate in the EU under UK-specific corporate structures, in particular limited liability partnerships,” the report said.

At the same time, accountants might find themselves adversely affected if the EU were not to recognise UK regulations as an equivalent standard, the peers found. The issue is being negotiated separately from free trade.

Auditors in Britain could find their checks on accounts of UK companies whose securities are listed in the EU no longer comply with European law, for example. Britain’s audit regulator could similarly be blocked from inspecting work carried out by auditors in an EU jurisdiction working on components of a UK group.

“It’s a piece of the plumbing that needs to be connected before the end of the year,” said John Boulton, director of technical policy at the Institute of Chartered Accountants in England and Wales. “The hope is that more sensible minds prevail but that is the reality of EU law suddenly pulling away.”

In the committee’s report, Helen Brennan, a director of KPMG UK, said a lack of equivalence in audit oversight “could contribute to a gradual erosion of trust in the audit itself”.

Mutual recognition of professional qualifications will also be required to enable UK firms to provide EU services after January 1.

The report warned that the Ceta deal had so far been ineffective. Lawyers would again be at risk, it cautioned, although it acknowledged UK government efforts to secure some recognition of legal qualifications.

Travel restrictions may even make it impossible for UK professionals to spend time in the EU. In its report, the committee pointed out that Ceta allowed EU countries “to impose reservations on short-term business visitors” — limiting their stays to 90 days a year — and visas might take up to 90 days to process.

A UK government spokesperson said they had pushed for business interests throughout the talks and wanted to meet their ambition for future trade in services, recognising the huge importance of these professions for the UK economy.

“We have tabled far-reaching proposals in this area that are appropriate for an FTA, but we have been met by resistance from the EU and have had to adapt accordingly. We remain committed to working hard to reach an agreement, and hope to see EU proposals that at least match what they have offered to other third countries.”

Tue Oct 13 , 2020
Consumers increased spending on improving their homes and stockpiling goods in September in preparation for a tightening of restrictions, providing a boost for retailers. Sales in the UK rose 5.6 per cent last month compared with the same period a year ago, according to data from the British Retail Consortium […] 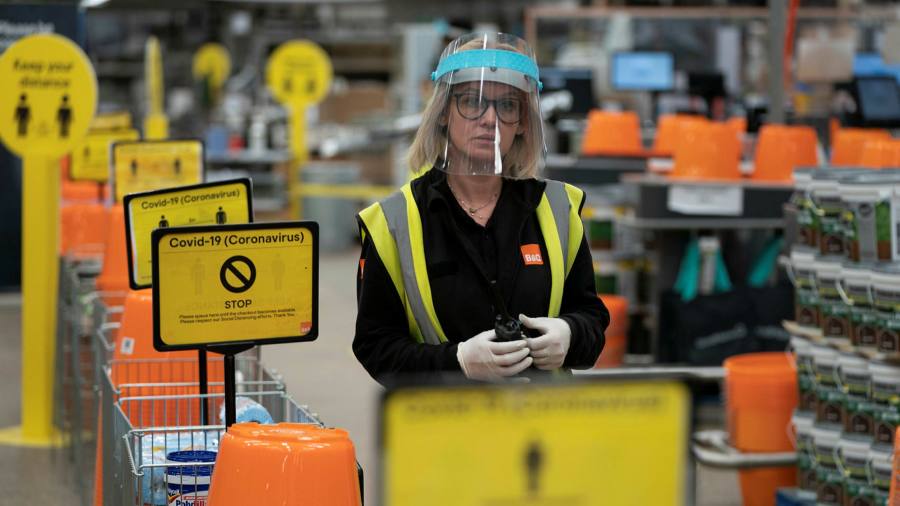