The UK’s three largest mortgage lenders have teamed up to measure the climate emissions linked to their entire loan books, part of an initiative backed by former Bank of England governor Mark Carney. Lloyds Banking Group, Nationwide and NatWest will on Thursday become founding members of the Partnership for Carbon […]

The UK’s three largest mortgage lenders have teamed up to measure the climate emissions linked to their entire loan books, part of an initiative backed by former Bank of England governor Mark Carney.

Lloyds Banking Group, Nationwide and NatWest will on Thursday become founding members of the Partnership for Carbon Accounting Financials’ UK coalition, joining a growing international trend among big banks trying to respond to customer and investor pressure to clean up their balance sheets.

Mr Carney, who since leaving the BoE has taken roles advising the government on climate finance and launching an “impact investing” fund at asset manager Brookfield, said the move was “an important step to ensuring that every financial decision takes climate change into account”.

He added: “Every company, every bank, every insurer and investor will have to adjust their business models” to meet net zero emissions targets.

“For financial firms, that means reviewing more than the emissions generated by their own business activity.”

The new UK initiative is part of a wider effort to create global standards for carbon accounting. Bank of America, Morgan Stanley and Citigroup, three of the five largest US banks, all joined the PCAF earlier this summer.

Giel Linthorst, executive director of the PCAF secretariat, said he hoped the commitments from several major banks in the US and UK would put pressure on rivals to make similar commitments.

“We need to get a critical mass of financial institutions globally that adopt and measure to the standard and report on it,” he said.

Lloyds and NatWest both pledged earlier this year to halve the net carbon emissions linked to their loans, but admitted that they did not yet know how high those emissions were.

While some banks like rival Barclays have come under particular scrutiny for their involvement in lending to high-polluting industries such as coal mining, the accounting methods developed by the PCAF have also highlighted the negative impact of less obvious activities like mortgage lending.

Dutch bank ABN Amro, one of the earliest members of the partnership, said in its latest annual report that its residential mortgage lending was indirectly responsible for 3,385 kilotons of greenhouse gas emissions in 2019, more than its lending to mining or industrial companies.

NatWest became the first major British lender to signal its support for the PCAF in July, but Thursday’s announcement includes an increased commitment to co-operation on how to implement its standards in the UK.

Thu Sep 17 , 2020
Boris Johnson’s readiness to tear up the UK’s reputation for honest dealing by rewriting the EU withdrawal deal has grabbed the headlines. The news, though, is worse. Legislation to create a post-Brexit single market across England, Scotland, Wales and Northern Ireland shows equal contempt for the UK’s constitutional settlement. By […] 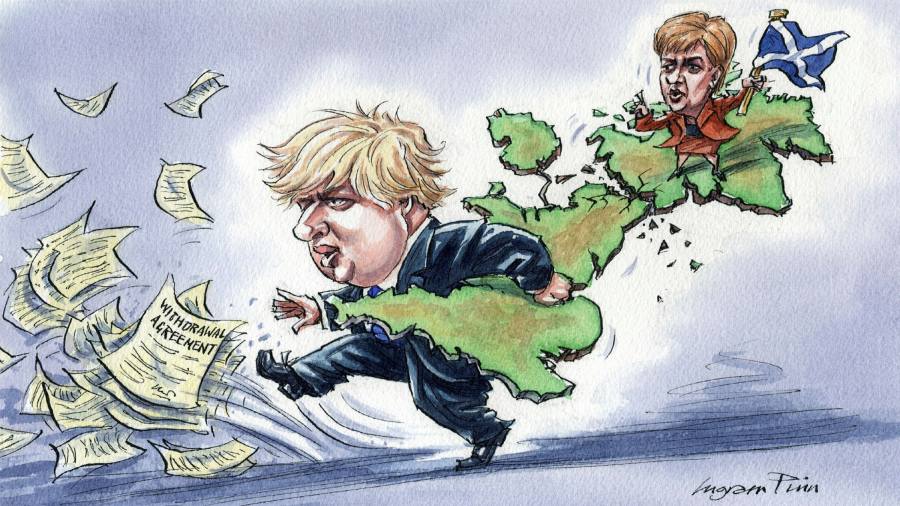