The government is facing growing opposition from industry over its plans to impose a 14-day quarantine on travellers arriving from overseas, with all five key manufacturing sectors warning the measure could disrupt production, leading to supply shortages and further job losses.

The automotive, aviation, chemical, food and pharmaceutical industries all warned that exemptions will be needed to ensure the smooth operation and safety of their factories, many of which depend on specialist “fly in, fly out” engineers to service production lines.

The quarantine plan is one of the measures aimed at suppressing new coronavirus infections as the UK emerges from lockdown.

Ian Wright, the chief executive of the Food and Drink Federation, which represents the UK food industry, said there were “major concerns” that a quarantine scheme would cut off expertise needed to maintain the specialist machinery and equipment used in UK factories.

“It’s clear that if engineers or other manufacturing specialists from abroad are required to self-isolate when they enter the country, they simply won’t come,” he said.

“Broken machinery could lead to unpredictable delays in production. If exemptions are not made this could quite quickly have the potential to cause real issues for food and drink supply.”

Paul Everitt, chief executive of ADS, which represents aerospace companies, has written to Grant Shapps ahead of a call the transport secretary is hosting on Wednesday, complaining that the new restrictions “will risk jobs in aviation, aerospace and across the economy”.

Mr Everitt added there would be an “additional impact on UK manufacturing, servicing and maintenance where engineers are often tasked to travel to the UK to fix critical issues on the production line or in aircraft maintenance”.

Under the quarantine plans first announced by Boris Johnson last Sunday, overseas arrivals to the UK will be asked to provide details of their accommodation and self-isolate for 14 days. Those who break the rules risk arrest and spot fines starting at £100, rising to a maximum of £3,200 for repeat offenders.

The government has said that the new rules, which are still to be finalised, will include only a “short” list of exemptions — although a special deal exempting all arrivals from France has already been negotiated, raising further questions about the efficacy of the scheme.

Industry leaders have privately expressed frustration at the lack of prior consultation and joined-up thinking in Whitehall on the quarantine plan.

The Chemical Industries Association (CIA) said it had also expressed concern, calling for foreign-based workers needed for “essential factory and laboratory operations, as well as executives taking on-site decisions” to be exempted, so long as “suitable health and safety arrangements” were in place.

Carmakers said government must collaborate with manufacturers on the implementation of the quarantine measures to avoid inadvertently undermining industry efforts to get production up and running again.

Mike Hawes, the chief executive of the Society of Motor Manufacturers and Traders (SMMT), the industry body, said that while he understood the “tremendous pressure” ministers were under to protect public health, carmakers already had strict social distancing and hygiene measures in place for workers.

“Like many other sectors, vehicle manufacturers often rely on being able to move skilled engineers and other staff with unique expertise of complex machinery between plants in different countries,” he said.

“This is often done at short notice to address urgent issues so any measures that could prevent the operation of plants need to be considered very carefully in light of the risk.”

Richard Torbett, the chief executive of the Association of the British Pharmaceutical Industry (ABPI), said he believed the government understood that exemptions would be necessary for global business to function effectively.

“For life sciences companies, this would include some leadership functions as well as those for essential research and development, manufacturing and supply of medicines,” he added.

The mounting opposition from across the UK manufacturing base, follows intensive lobbying by the aviation industry in recent days since it became aware of plans to introduce quarantine measures. Airlines have called for a “pragmatic and proportionate plan to enable the resumption of flying”.

The UK aerospace sector, which has an annual turnover of £36bn, has warned of heavy losses as a result the damage done to the airline sector by the lockdown. Rolls-Royce, the aero-engine maker, is threatening to cut as many as 8,000 jobs.

Mr Shapps will host a conference call with aviation industry executives on Wednesday afternoon to discuss implementation of the quarantine plan.

A government spokesperson said the quarantine requirement was part of its efforts to “prevent reinfection from abroad and a second wave of cases that overwhelms the NHS” which remained its “priority”.

Wed May 13 , 2020
People queue to enter the Chanel boutique at a department store amid the coronavirus disease (COVID-19) outbreak, in Seoul, South Korea, May 13, 2020. REUTERS/Minwoo Park SEOUL (Reuters) – More than a hundred shoppers waited in line to enter a store of French luxury brand Chanel in Seoul on Wednesday, […] 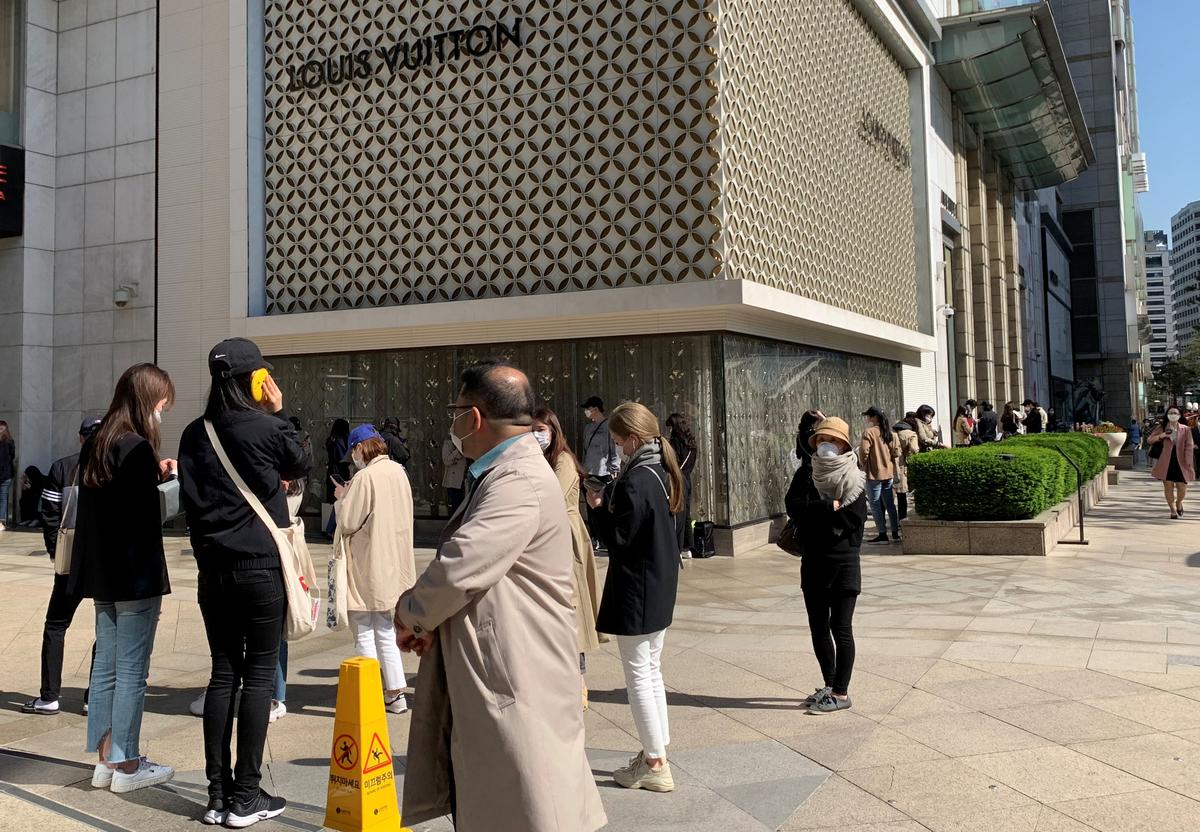