The president of the European Commission said on Thursday she was convinced a trade deal with the UK was still possible despite the “distraction” caused by Boris Johnson’s move to violate the Brexit withdrawal treaty.

Ursula von der Leyen said Britain’s decision to pursue legislation overriding elements of the withdrawal agreement had come as a “very unpleasant surprise” to the EU and that it was down to London to restore trust and remove the question mark it had put over the treaty.

But she said that EU-UK talks should continue, with the dispute kept at arm’s length from the sides’ future relationship negotiations, which centre on a trade deal.

“I am still convinced it can be done,” Ms von der Leyen said in an interview. “It is better not to have this distraction questioning an existing international agreement that we have, but to focus on getting this deal done, this agreement done — and time is short.”

The comments from the head of the EU’s executive arm reflect an emerging European strategy to keep trade talks with the UK alive while Brussels continues to contest the British prime minister’s internal market bill that would override parts of the Brexit withdrawal treaty and thereby breach international law.

EU diplomats said the bloc would not take decisions on whether to initiate legal action against the UK over the bill until after the next formal round of trade talks with Britain, which are scheduled to take place at the end of this month.

Diplomats also underlined that the bloc was keen to channel the dispute over the bill into the EU-UK joint committee that is in charge of implementing the withdrawal agreement.

Maros Sefcovic, the EU’s top representative on the joint committee, wrote to his UK counterpart Michael Gove last week to insist the bill would breach the Brexit treaty “if adopted as proposed”.

In the September 11 letter, Mr Sefcovic reiterated Brussels’ call for the UK to withdraw from the bill the measures that would override the treaty by the end of September.

EU diplomats said that the language was carefully chosen to give the UK a ladder to climb down in the dispute, as Brussels is not demanding that the legislation be scrapped in its entirety, only substantially amended.

“We should not overreact,” said one EU diplomat. “We will continue negotiations because there are two separate tracks: one is the one which the UK has decided to violate, and the other is the future relationship.”

Brussels officials have noted progress in last week’s round of future relationship talks, despite the dispute over the internal market bill.

The government is still asking parliament to break international law . . . I don’t know what my colleagues will do, but as far as I’m concerned this is a matter of principle

In a closed-door briefing with EU diplomats on Wednesday, a commission official highlighted some progress had been made on the vexed issue of access to British fishing waters.

Other than fish, problematic issues in the trade talks include a continued stalemate over EU demands for a regulatory “level playing field” to protect its businesses from unfair competition.

EU officials noted that, while trade talks will continue, the bloc will never be able to sign off and ratify a trade deal until the dispute over Mr Johnson’s internal market bill is resolved. The European Parliament has already ruled out ratifying any agreement until the UK backs down.

Ms von der Leyen was speaking with the Financial Times and a group of other media organisations on Thursday in the wake of her State of the Union speech to the European Parliament the previous day.

She insisted that the withdrawal agreement struck late last year with Mr Johnson had been a good deal and that Britain should not now reopen it.

“As long as the internal market bill attempts to change provisions in the withdrawal agreement we have a problem,” she said. “The ball is in the field of the UK to restore trust.”

On Thursday Mr Johnson’s government published details of the concessions it had offered rebel Conservative MPs to try to secure parliamentary approval for the internal market bill.

Mr Johnson has agreed that MPs should have a vote to approve the implementation of ministerial powers to override the Northern Ireland protocol that forms part of the Brexit treaty. 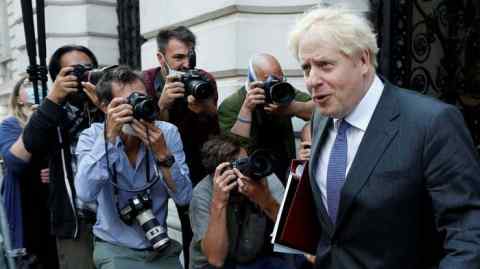 It would be up to the government to prove to MPs that the EU was “engaged in a material breach of its duties of good faith, thereby undermining the fundamental purpose of the NI protocol”.

The prime minister also agreed that the powers should be used “in parallel” with the “appropriate formal dispute mechanism” set up under the Brexit treaty “with the aim of finding a solution through this route”.

But UK officials confirmed that this was likely to irritate Brussels because it suggested that Britain would act first and not wait for the conclusion of the arbitration.

The concessions should ensure the internal market bill passes through the House of Commons by the end of the month — but a much bigger clash awaits in the House of Lords in November.

Michael Howard, the pro-Brexit former Conservative leader who has previously spoken out against the bill, told the BBC: “The government is still asking parliament to break international law . . . I don’t know what my colleagues will do, but as far as I’m concerned this is a matter of principle.”

Some Tory MPs hope that Mr Johnson will use the time between now and November to resolve the dispute with the EU amicably before a showdown with the Lords.

Thu Sep 17 , 2020
Stocks in Asia-Pacific were set to trade lower at the Friday open, with technology shares set to be watched after their counterparts stateside saw losses overnight. Futures pointed to a lower open for Japanese stocks. The Nikkei futures contract in Chicago was at 23,305 while its counterpart in Osaka was […]