The UK’s welfare system is prepared for a million-strong surge in the number of people claiming jobless benefits this winter, as the tapering of government wage support forces employers to take tough choices, according to the minister responsible for its smooth running. Thérèse Coffey, the work and pensions secretary, told the […]

The UK’s welfare system is prepared for a million-strong surge in the number of people claiming jobless benefits this winter, as the tapering of government wage support forces employers to take tough choices, according to the minister responsible for its smooth running.

Thérèse Coffey, the work and pensions secretary, told the Financial Times that catastrophic job losses were not inevitable when the furlough scheme ended this month. Its successor — which will be far less generous to employers — was “well targeted on starting to get companies to make choices”, she said, adding it was not yet clear whether they would opt for “fundamental restructuring” or keeping staff levels more stable, as they had after the last recession following the 2008 financial crisis.

But while insisting that the UK would not see a return to a Thatcherite era of mass unemployment, Ms Coffey acknowledged that many lower-paid workers were already in the line of fire, as employers appeared to be holding on to higher-skilled staff who were harder to replace.

“We’ve got this winter ahead of us . . . I want to make sure people keep a roof over their heads,” she said in an interview on Friday.

Rishi Sunak, chancellor, has shifted his focus this autumn from supporting jobs that may no longer exist through the furlough scheme to emphasising training and support for people moving into jobs with a longer-term future.

During the transition, the welfare system will come under considerable pressure. But Ms Coffey hinted that she would not extend the £20 weekly uplift to universal credit, the main welfare payment, that was put in place at the start of the pandemic, when it expires next April.

Many charities and campaign groups have called for the increase to be made permanent, arguing that years of welfare cuts have left the UK’s safety net too threadbare to cope with the scale of likely job losses.

The Resolution Foundation, a think-tank, published research on Saturday showing that allowing the uplift to expire would affect about 6m families — leaving unemployment support at its lowest level in real terms in three decades and the poorest fifth of households facing a 7 per cent income loss next year.

But Ms Coffey said the increase had been a stop-gap measure — quick to deploy and bringing the basic rate of universal credit close to statutory sick pay — but, at a cost of £5.7bn, might not be “the most effective way to protect the largest number of people”.

Other welfare options under discussion with the Treasury included focusing extra support on children, or lengthening to 12 or 18 months the nine-month grace period before applying the benefits cap that limits the amount of money an out-of-work household can receive, she said.

Ms Coffey, who succeeded Amber Rudd as work and pensions secretary last September, has overseen Britain’s safety net expand its reach from 1.2m people before the pandemic to 2.7m in August, the most recent month for which there is data. It has been done with little fanfare or political controversy — although Ms Coffey said she had felt at times like the cartoon character Gromit, laying tracks in front of a speeding train.

The former environment minister said the system would manage “absolutely fine” if there was a surge of 1m more claims — a rise that would be consistent with forecasts by the Bank of England and Office for Budget Responsibility, the fiscal watchdog — and that she was “confident of our ability to do more” if the economic fallout was worse than this.

Her department is now shifting its focus from dealing with the flood of new benefit claims, to helping people find jobs. It is in the middle of a recruitment drive to double the number of work coaches across its network of jobcentres to 27,000 by next March, and raise its overall staffing levels to about 100,000 — about one in five of all civil servants.

The new Kickstart scheme — under which the government will fund six-month work placements for unemployed young people — is up and running, with the department sifting through applications from employers to fill 65,000 positions. 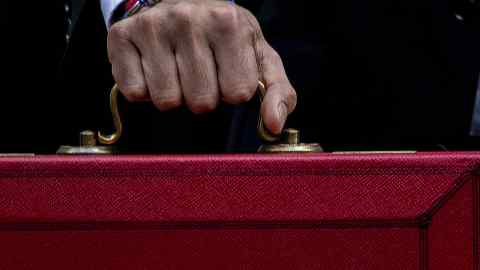 On Monday, Ms Coffey will launch a more general support scheme — branded Job Entry Targeted Support, or Jets — to steer people who have been out of work for more than three months into jobs in sectors that are hiring.

Hailing from the right of the party, Ms Coffey is among ministers most concerned about the economic impact of coronavirus. She noted ruefully that the government’s initial “stay at home” message had proved rather too effective. “People were very good at staying at home,” she said.

But she insisted the government was now striking “the right balance” between some national coronavirus restrictions in England, such as a 10pm pub and restaurant curfew, and what she called “a localised rapid response”.

The work and pensions secretary downplayed the likelihood of the government suspending its costly pensions “triple lock”. She said: “The prime minister loves keeping his manifesto commitments,” she said.

Mr Sunak had floated the idea of suspending the policy, which increases state pensions by whichever is the highest out of inflation, average wage rises or 2.5 per cent, amid fears that the Covid-19 crisis would cause massive distortions.

The chancellor had feared that a big fall in wages in 2020 related to the furlough scheme might see a rapid rebound in wages of perhaps 5-10 per cent the following year as the economy recovered, feeding through into big state pension rises.

Ms Coffey said the big fall in wages expected by the government had not materialised. “It doesn’t look like it is unfolding that way,” she said.

Sun Oct 4 , 2020
More than half of UK directors will cut back office space as staff move more permanently to working from home in a sign of the long-term impact of the pandemic on the British property market, according to a business group survey. Companies have been forced to send many employees home […]