In 2012, General Electric’s director of tax policy, Will Morris, received a trophy from HM Revenue & Customs, in recognition for his role in “informing the public debate on large business and tax and condemning tax evasion and abusive tax arrangements with no commercial purpose”.

Since then the UK tax authority has discontinued its “external engagement awards”. It has also drastically revised its view of GE’s tax department.

In the first case of its type against a multinational company, HMRC is accusing the US industrial giant of fraud — and demanding $1bn in back taxes.

The lawsuit pits a newly assertive HMRC against an iconic US industrial name. If HMRC is successful, it would be one of the largest single wins for the tax authority against a global company. It could mark the beginning of a more aggressive approach to tackling complex tax avoidance in the UK.

“This appears to be the first time that HMRC has accused a major company of engaging in fraudulent misrepresentation in order to gain a tax advantage,” said George Turner, director of the think-tank TaxWatch, which has published a report into the case. “It will send shockwaves through the world of tax.”

The case is financially significant for GE, which after racking up losses for the past four years finds a $1bn cheque quite painful to write. It also affects a host of other institutions — including Slaughter and May, the law firm that advised GE on the deal in question, and PwC, the Big Four accounting firm that now employs the bulk of GE’s former tax team, including Mr Morris.

It stems from a moment just before Christmas in 2005 when GE’s tax team — renowned in the industry as the “Harvard of tax departments” — appeared to win another major victory.

The GE group included Roy Clark, UK tax director, Jan Martin, a Connecticut-based lawyer, and Mr Morris, a British-born former US Treasury official and part-time priest. It convinced HMRC to approve a tax deduction on a controversial transaction that would go on to save the company hundreds of millions of dollars.

The agreement, reached after six months of meetings with HMRC, meant GE could circulate billions of dollars between the US, the UK and Australia without falling foul of Britain’s new anti-arbitrage tax laws, which had come into force just months earlier.

HMRC has claimed that it was deceived by GE during the six months of negotiations in order for it to obtain a “triple dip” tax advantage in all three countries. It has alleged that the US group misled its executives into believing the transaction would be used to invest in an Australian business, when instead, it claims, the money was moved around the group for the purpose of creating tax deductions.

It has asked the High Court to annul the 2005 agreement, which would force GE to pay 15 years of taxes on the transaction, plus interest and fines, totalling more than $1bn.

GE has denied it misled HMRC about the nature of the transaction. It has countersued in an attempt to force the tax authority to drop the case. “GE complies with all applicable tax laws in every country where we do business, and we reject the UK tax authority’s allegations and are vigorously contesting these false claims,” it said in a statement.

The UK attempted to clamp down on tax arbitrage schemes in 2005. Household names such as Barclays had been exploiting a mismatch between different countries’ tax rules to move money abroad and lower their tax bills at home.

Anti-arbitrage laws allowed HMRC to block tax relief claimed by a company in the UK if the company had claimed a deduction in another country for the same expense — a “double dip” advantage.

Concerned that the new rules could be applied to the transaction, GE called a meeting with HMRC on April 1. As well as five GE representatives, the attendees included Steve Edge, a senior partner at Slaughter and May, who was advising the company, and, representing the UK government, a senior tax official Dave Hartnett, who later became permanent secretary of HMRC, and Ken Almand, a tax inspector.

The company argued it should be entitled to tax relief on the Australian transaction because interest payments used to fund commercial transactions are tax deductible and because its main purpose was not to obtain a tax advantage in the UK.

Despite his reservations, an agreement was reached in December that cleared the Australian transaction under the anti-arbitrage rules.

Then, in late 2018, HMRC changed its mind. It said it had received new information from the Australian tax authorities that painted a very different picture of the structure and purpose of the transaction. It filed a claim at the High Court that alleged GE had made a “series of misrepresentations”. Last May, it escalated matters, applying to the court to change its case to an accusation of fraud.

In court documents, HMRC claimed that its 2005 decision relied in part on the minutes of a board meeting at GE in which crucial passages had been removed. The minutes it received led it to believe that the loans from the UK business had been used to make a “long-term equity investment” in an Australian financial services company, HMRC claimed.

The full minutes — obtained by HMRC years later — showed that the loan was in fact part of a much larger circular flow of cash through GE companies and that “none of the borrowing was used to acquire any shares” in the Australian company, according to HMRC’s claim.

GE had borrowed $3.8bn from an unnamed US bank that — over just four days — were moved between its operations in the US, Luxembourg, the UK and Australia, before being returned to the same bank.

TaxWatch said: “From HMRC’s point of view, all of this confirmed what they had suspected from the beginning, that the purpose of the so-called Australian investment was nothing more than to take advantage of a tax arbitrage opportunity in the UK.”

HMRC told the Financial Times: “We are unable to comment on ongoing litigation. We make sure every taxpayer, no matter what their size, pays everything they owe under UK law.”

GE denies all wrongdoing. Its defence says the missing minutes do not “constitute a material omission” and that they were presented to HMRC as an “extract” rather than a complete document. It says HMRC was aware that the loan had been used to refinance intragroup debts.

The High Court last Friday ruled HMRC can pursue its case of “fraudulent misrepresentation” on the allegation that GE failed to disclose all of the relevant information about the Australian investment despite stating that it had done so. “The essential allegation . . . that GE failed to disclose the complete picture and that it did so deliberately — will be permitted to go to trial,” wrote Mr Justice Zacaroli.

If the case goes to trial, as planned, in October 2021, it will involve other big City of London institutions. More than a decade after the deal, GE moved most of its global tax team to PwC, outsourcing its tax work to the accounting firm to cut costs.

Among those who joined PwC were Mr Morris, Rick D’Avino and Patrick Brown, who helped negotiate the 2005 deal with HMRC. But PwC has also recruited from the other side, hiring Diane Hay, one of five HMRC officials who led negotiations with GE. PwC has a third connection to the case: its legal department is defending GE. It is a large instruction for PwC’s legal team, which made about £70m in revenues in the UK in 2018, comparable to a small City law firm.

Advice given by Slaughter and May could also come under scrutiny. The case is expected to turn on what was said in the first meeting between GE and HMRC on April 1 2005. As GE’s lawyer at the time, Mr Edge — a tax law veteran who has worked at Slaughter and May since 1975 — was one of the key people in the room.

PwC, Slaughter and May and Mr Edge declined to comment.

GE claims it was clear about the purpose of the transactions during the meeting. “The defendants will rely at trial on the evidence of what representations were actually made . . . as opposed to what are now merely inferred by HMRC,” its defence said.

Tue Aug 4 , 2020
Virgin Galactic has revealed designs for a supersonic passenger plane capable of flying three times the speed of sound. With a top speed of around 2,300mph (3,700kmh), it could fly from London to Sydney in just five hours – or to New York in less than two. Virgin has teamed […] 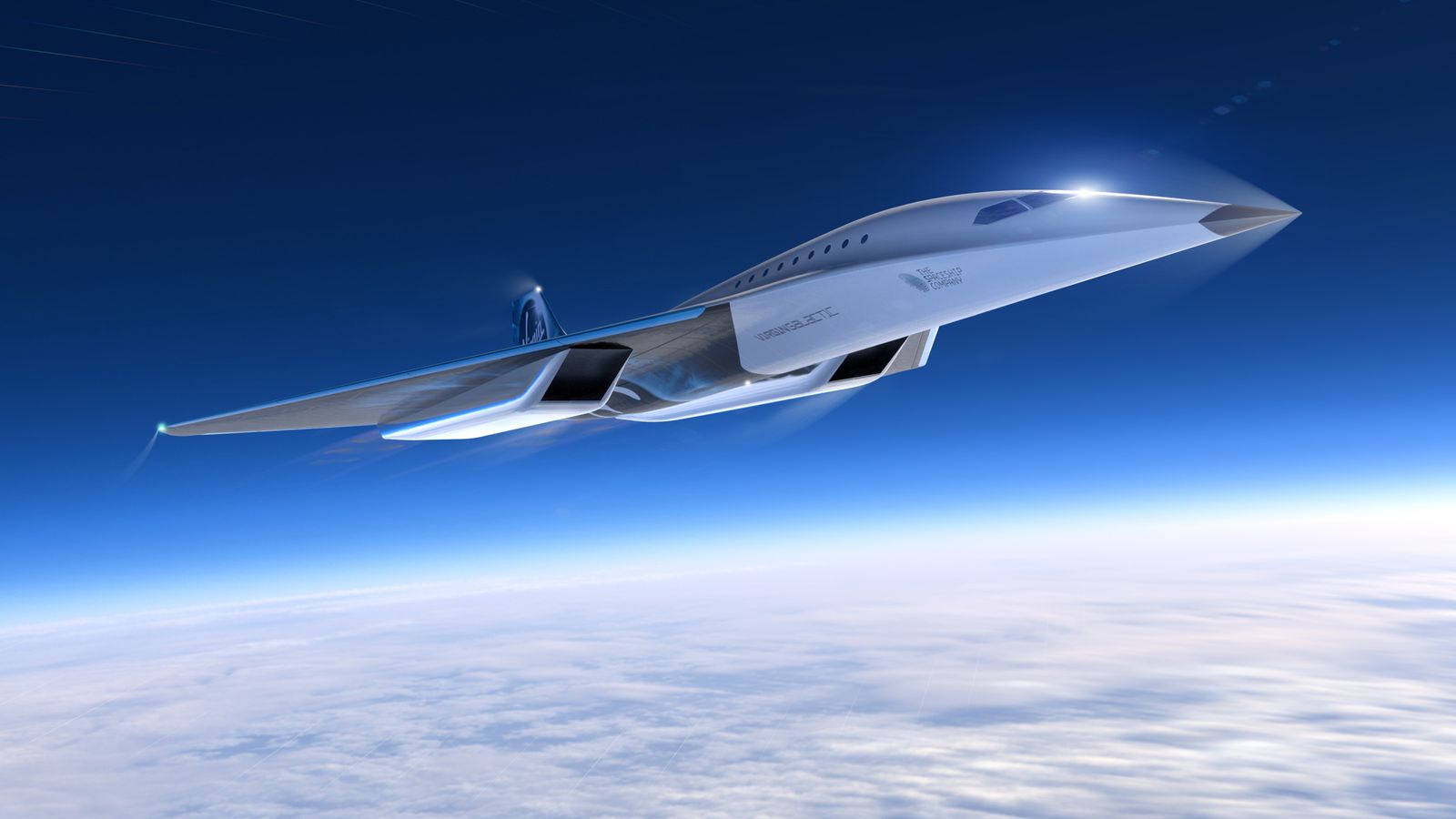