LONDON (Reuters) – Euro zone manufacturers appear to have passed their nadir, a survey showed on Monday, but activity is still contracting sharply as government-imposed lockdowns due to the coronavirus pandemic keep demand in check.

FILE PHOTO: A businessman walks on the esplanade of La Defense, in the financial and business district in La Defense, west of Paris, April 10, 2014. REUTERS/Gonzalo Fuentes/File Photo

Many countries in the bloc have slowly started to reopen parts of their economies even though cases of the virus — which has infected more than 5.8 million people worldwide and killed over 360,000 — are still being reported.

It rose to 39.4 in May from April’s 33.4, still a long way from the 50 mark that separates growth from contraction and just below an earlier flash reading of 39.5.

An index measuring output, which feeds into a composite PMI due on Wednesday, remained weak but did almost double to 35.6 from April’s record low of 18.1.

“The manufacturing downturn looks to have bottomed-out in April, with production falling at a markedly slower rate in May,” said Chris Williamson, chief business economist at IHS Markit.

“The improvement in part merely reflects the comparison against a shockingly steep fall in April, but more encouragingly was also linked to companies restarting work as virus lockdowns were eased.”

But with citizens still encouraged to stay home and many businesses remaining shuttered, forward-looking indicators in the survey suggested the recovery would be slow, echoing the findings in a Reuters poll last month. [ECILT/EU]

Headcount was slashed again, backlogs of work were completed at a near-record pace while stockpiles of finished goods were built up, and raw material purchases declined sharply.

With hopes the worst has passed, however, purchasing managers were less pessimistic last month. The future output index, which gauges optimism about the 12 months ahead, bounced closer to the breakeven point of 50, registering 44.6 compared to April’s 36.6.

UK factories suffer sharp fall in May, but less than in April - PMI

Mon Jun 1 , 2020
LONDON (Reuters) – British manufacturers saw another sharp downturn in May but the pace of the slump eased off from April’s record fall as the coronavirus shutdown brought much of the economy to a halt, a survey confirmed on Monday. FILE PHOTO: An almost empty Westminster Bridge is seen, as […] 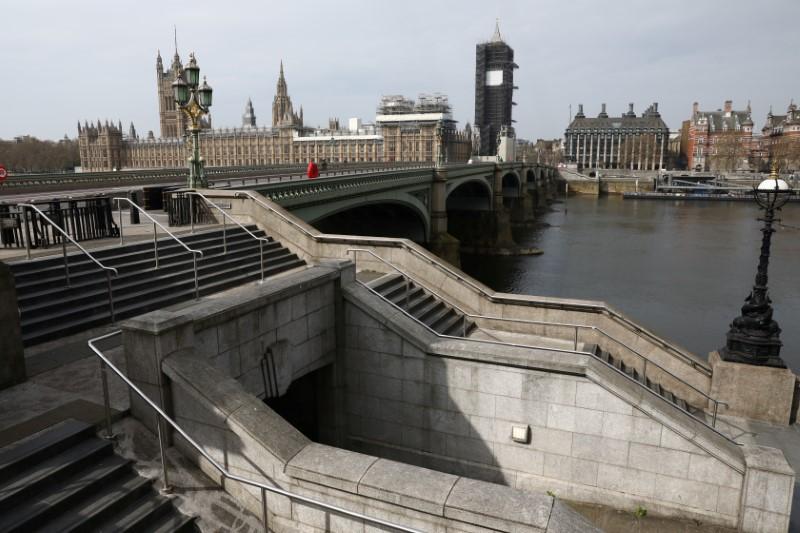