FTSE 250 stocks have bounced strongly in recent weeks. The mid-cap index is up 28% since its market-crash low on 19 March. Remarkably, three FTSE 250 stocks I tipped on that date as “great buys for long-term investors” have soared (one by as much as 159%). These are truly volatile times.

The three stocks I refer to are JD Wetherspoon (LSE: JDW), WH Smith (LSE: SMWH),  and National Express (LSE: NEX). They’ve risen 85%, 113% and 159% respectively. After these spectacular gains, would I still buy them today?

It’s tempting to simply take profits in these situations. However, I’d suggest it remains a matter of focusing not on the price, but the valuation. And whether there have been any other changes to the original investment case.

Here’s a summary of my original investment case for the three FTSE 250 stocks:

Clearly, after the big rises in their share prices, their valuations have changed. So, let’s begin with the valuation changes.

When I was writing on 19 March, the multiples of these FTSE 250 stocks were 7.1, 2.9, and 5.2, respectively. I’ll come back to their current earnings ratings, but first let’s look at any other key changes between 19 March and today.

Wetherspoons released its half-year results on 20 March. Net debt and borrowing facilities were little different to those previously reported. And management sounded confident about the group’s liquidity.

However, the government subsequently announced all pubs must close. Wetherspoons hasn’t yet updated the market on what this new situation means for the company. As such, we’re rather in the dark for now.

WH Smith had described itself on 12 March as “a resilient business with a strong balance sheet, substantial cash liquidity and strong cash flow.” However, on 6 April, it announced: “The board has decided to strengthen the balance sheet and liquidity position with additional financing.”

Its equity fundraising and new banking facilities mean its financial position is stronger than when I was writing on 19 March.

Meanwhile, National Express, which released a statement on that date (I described it as “highly encouraging on the matter of liquidity”), has made no further update. As such, its financial position is unchanged since my previous article.

I wouldn’t be rushing to buy shares in JD Wetherspoon at the current price. Its rating of 13.2 times 2019 earnings is up with events, in my book, and as it hasn’t yet updated us since all pubs closed, I rate the stock a ‘hold’.

However, I still see WH Smith and National Express as very buyable at current levels. The former, due to its strengthened financial position, and not-excessive (in my view) earnings multiple of 11.1. The latter, because its 7.5 multiple still looks cheap to me.

The post Would I buy these 3 FTSE 250 stocks that are up 85%+? appeared first on The Motley Fool UK.

G A Chester has no position in any of the shares mentioned. The Motley Fool UK has recommended WH Smith. Views expressed on the companies mentioned in this article are those of the writer and therefore may differ from the official recommendations we make in our subscription services such as Share Advisor, Hidden Winners and Pro. Here at The Motley Fool we believe that considering a diverse range of insights makes us better investors.

Brexit negotiators try to pick up pieces as talks resume

Tue Apr 14 , 2020
The EU and UK will return to the Brexit fray on Wednesday to figure out how to salvage negotiations on London’s future relationship with the Brussels in the face of disruption caused by the coronavirus pandemic. Michel Barnier and David Frost, the two chief negotiators, will have their first official […] 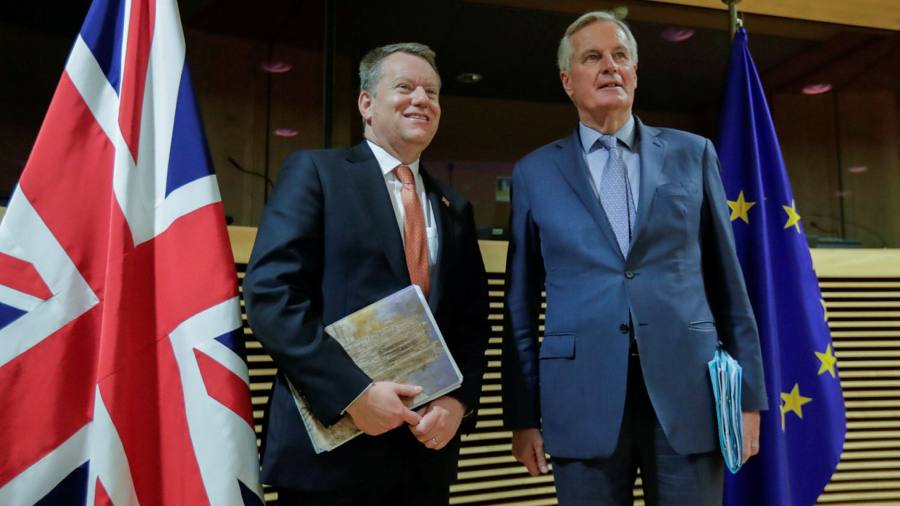